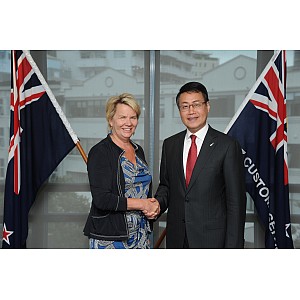 Ms Wagner and NZ Customs officials met with the Vice Minister of the General Administration of China Customs Mr Sun Yibiao and his delegation in Auckland on 9 February to discuss facilitating trade and combating drug trafficking.

“Both Customs administrations have committed to a joint electronic verification system that will provide greater assurance over documents used to gain tariff preference for our traders in China.

“Today we endorsed a plan to support electronic verification, something I am sure will help to further boost trade between our two countries.”

Both agencies have also been working closely together in recent years to combat the illegal trade of methamphetamine and its precursors from China through New Zealand Customs’ liaison officer based in Beijing.