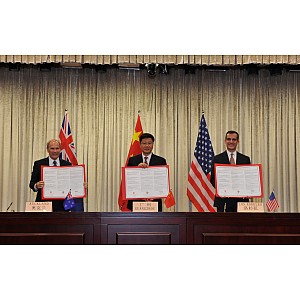 Mayor Len Brown has signed a historic agreement with the Mayors of Los Angeles and Guangzhou, to boost economic cooperation between the three cities.

The Tripartite Economic Alliance signing on Sunday was the centrepiece of celebrations to mark the 25th anniversary of Auckland’s sister city relationship with Guangzhou.

Len Brown led an Auckland delegation to Guangzhou, and will host Mayor Chen Jianhua in Auckland this week, when the Guangzhou Mayor accompanies a Chinese national delegation to New Zealand.

Via the alliance, the three cities aim to set a new standard for how modern cities engage and collaborate in the 21st Century and plan to work closely together to enhance trade and economic relations.

The alliance will focus on forging connections between the cities’ education, screen and digital, innovation, and tourism sectors, in turn leading to job creation.

A Tripartite Project Team is working with stakeholders in the Auckland education, screen and digital, innovation, and tourism sectors as well as Auckland’s industry and business representatives to identify opportunities as part of the agreement.

From this work, a range of initial proposals are now under consideration by all three cities. These include work on air quality solutions, sustainability, waterfront regeneration, port-to-port alliance, chambers of commerce cooperation, film distribution, retail and fashion promotion.

This is the first time any of the three cities have engaged in a formal economic agreement and is understood to be the only known global threefold city agreement of its kind.

The agreement will initially be three years long, with an option to extend the timeframe if all the cities agree. It will formalise a high-level political and strategic commitment, rather than create binding legal obligations.