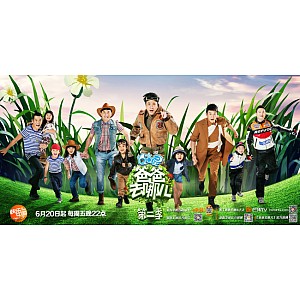 Two hundred minutes of New Zealand's landscapes, people and activities is likely to reach millions of Chinese viewers after the country played host to China's most popular reality TV show.

The show Dad, where are we going? has spent the past week filming in the central North Island. New Zealand is the only international destination to feature in the hugely popular show, now in its second season.

Tourism New Zealand and Air New Zealand worked together to secure the sought after opportunity, competing against other international destinations for the show and the coveted profile it will provide. New Zealand will play a starring role in the last two episodes of season two, which means featuring in the all-important season finale.

The show follows five celebrity fathers and their children (aged from 3 - 7) on an adventure to mystery destinations. In New Zealand the celebrities will experience local culture and accomplish a series of 'missions' with, and against, each other.
Tourism New Zealand Chief Executive Kevin Bowler says it was a major coup for New Zealand to secure the broadcast and the magnitude of the opportunity is hard to put into words.

"Season one of the show attracted one of the biggest nationwide audiences in China ever. It is estimated around a quarter of the population have watched it.

"The first 12 episodes of season two have already gone to air, and have received No.1 ratings and impressive audience numbers, along with a giant social media influence - more than 14 billion social media comments have included the show's hashtag.

"There is no doubt that by featuring in the show, New Zealand will become one of the most talked about international visitor destinations of the year. Our work in the market targets both the independent and quality group traveller and the show aligns well with this, showcasing the diversity of experiences in a New Zealand holiday, where no two days are the same."

The celebrity fathers include two of the most popular and famous actors in China Huang Lei and Lu Yi, a famous gymnast and Olympic champion Yang Wei, a singer-songwriter based in Taiwan Gary Cao and a famous Hong Kong actor Francis Ng. Two other celebrity guests will be joining the fathers, Huang Bo and Tong Dawei.

A post by one of the Dads on Weibo, China's most used social media channel, announcing he and his daughter were going to New Zealand has generated close to 100,000 likes and over 26,000 comments.

"We know that the endorsement of others is one of the most influential factors in helping people to make travel decisions and when this comes from celebrities the impact is even stronger.

"With our brand new 787-9 Dreamliner aircraft set to operate between Shanghai and Auckland from later this year, visitors from China can enjoy a state of the art inflight experience, including our award-winning Economy Skycouch product.

"The number of Chinese travelling internationally is set to grow exponentially and we in New Zealand have a truly world-class offering but it's important to continue to work together to find creative ways to ensure New Zealand is top of mind for these travellers."

Each episode is 100 minutes long, with the first going to air on 26 September and the season finale airing 3 October. The New Zealand regions visited during filming will be revealed when the episodes go to air.

It is not the first time Tourism New Zealand and Air New Zealand have worked together to leverage their association with an A-list Chinese celebrity. In 2012, Yao Chen, one of China's most high-profile celebrities and Tourism New Zealand's then brand ambassador in China, chose to wed in Queenstown. Her posting of holiday and wedding photos via social media channels resulted in around 7,000 print and online media articles across China, highlighting New Zealand as a wedding destination. Discussion on Weibo topped forty million items.