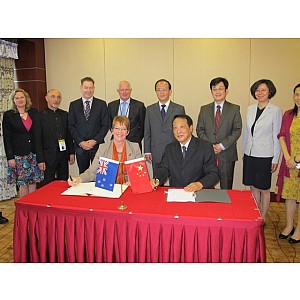 By Celia Wade-Brown, Mayor of Wellington:

Mayor Celia Wade-Brown reflects on her recent delegation to China.

I've been a longtime supporter of Mayoral delegations to Asia, well before I was elected Mayor and took on the responsibility for leading them myself. Understanding each other’s culture, making friendships at a strategic level, learning about new technology and encouraging healthy trade between nations are all worthy aims in themselves and also engender wider peace and trust. New Zealand's export economy has a strong showing in China and we often associate that with land-based products including dairy, wine and honey. While cities have a role to play in supporting the national interest, we also have special interests and the Capital has a focus on high-tech creative industries, education and tourism as trade opportunities.

This delegation was the third I've led to China and was an important opportunity to renew important connections. The delegation included Grow Wellington, our regional economic development agency, several diverse businesses, secondary and tertiary education institutions.

Beijing is one of our sister cities and the capital city relationship is very important. Mayor Wang Anshun welcomed us warmly and was interested in progress on the Wellington Chinese garden, education and plans for our film museum to build on Hobbit and Lord of the Rings' fame. He mentioned encouragement of individual tourists to visit Wellington. New Zealand is a very respected partner and the formal meetings offered me a good opportunity to acknowledge the national context while promoting Wellington's strengths in education, transparent governance, film including special effects and post-production, museum expertise, financial software, renewable energy and biodiversity.

It was a pleasure to sign a MOU with Vice Minister of Culture, Mr Ding Wei. An immediate result is the confirmation of Shaolin monks being part of September's World of WearableArt experience in Wellington. We also discussed a potential Chinese Cultural Centre for the capital. I introduced representatives from the Gibson Group and StQryInc with their expertise in museum exhibits and film-making.

One of our Treaty partners included a delegate who was able to both strengthen our cultural offering and advance potential business interests on behalf of the Port Nicholson Settlement Trust. The Māori cultural aspect of New Zealand provides several strengths. When the delegation jointly or individually present a waiata or haka, or speak of cultural and historical matters, we distinguish ourselves from most other Western nations. The respect for ancestral connection is a real touch point. The practice and performance also unify the delegation and make us particularly proud of our "kiwi-ness". We adapted protocol so we usually performed a waiata after the formal gift exchange. Two highlights in response were the students from the Beijing University of Political Science performing Pokarekare Ana and the Party Secretary of Zhejiang Province, Mr Xia Baolong, serenading us very ably on the erhu.

It's essential for mayoral endorsement to be based on solid company credentials. China's most recent five year plan puts much stronger emphasis on "greening the economy" so it was a real pleasure to have a delegate from The Formary taking steps to reduce burning of rice straw waste with their plans for new sustainable fabric production.

New Zealand's educational system is highly regarded and Wellington is a very safe and welcoming place to study. Our delegation included both public and private high schools and several tertiaries. I met agents from education networks, Shinyway and JJL, China’s largest education consultancy. Whitireia polytechnic signed an agreement with two Zhejiang universities that should bring 50 new students to our region. As the only capital city in the world with WHO safe community status, and a very walkable downtown, we offer Chinese students at all levels a very special experience.

Transport is always a hot topic for civic conversations and observations. I inspected the BYD electric buses in Tianjin, and learnt Hangzhou has ordered 2000 of them. All mopeds are electric rather than petrol. Air quality seemed somewhat better than on my last visit but traffic jams must reduce productivity and quality of life hugely. I enjoyed using Beijing's underground system when able to - usually a Mayor is expected to stick to the limo provided! In Hangzhou I rode the excellent separate cycle ways one early morning.

This delegation was successful both with specific agreements signed and the maintenance of our ongoing relationships. Every delegation is approved by our whole Council in advance and a report back is made. We were hosted very generously in every city, and our International Relations staff made innumerable organisational matters run smoothly. I also acknowledge NZCentral in Shanghai and the significant support from MFAT. While we have not formally agreed next visits, it's likely that a delegation in 2015 may encompass our longstanding sister city Xiamen and other South China interests.