An Overview of China’s Retail Industry 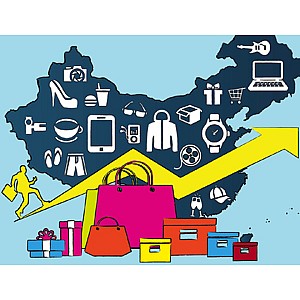 Moving towards a consumption – and service – focused economic model

Underpinned by the steady rise of household income, China’s retail market has become one of the most lucrative and rapidly growing in the world. China is currently the world’s second largest retail market, and Asia’s largest. It is expected to surpass the U.S. to become the world’s largest retail market by 2016. After years of accelerated growth and annual expansion rates of 10 percent or more, China’s growth in 2013 slowed down to 7.7 percent – level with the figure for 2012. This slowdown in growth is consistent with China’s effort to carry out a major overhaul aimed at weaning its economy off its decades-long reliance on heavy industry, export-oriented manufacturing, state-driven investment, as well as investment in infrastructure. Meanwhile, to rebalance the nation’s economy, policymakers are attempting to shift towards a more consumption- and service-driven model, hoping to foster and sustain more productive growth over the next decade and beyond.

In recent years the Chinese government has been pushing for pay increases to retain public support and boost domestic consumption. Wages have also risen as millions of Chinese move from the countryside into the cities, and as employers struggle to find and retain workers amidst China’s rapidly aging population. According to Bloomberg, salary figures from the first three quarters of 2013 showed an increase of about 11 percent from the comparable period in 2012. Urban residents saw their disposable income increase 9.7 percent last year, or 7 percent when factoring in inflation; in the same period, rural residents’ net income rose 9.3 percent after adjusting for inflation, as per official statistics released by China’s statistics bureau. In 2014, China’s wages are set to increase by 10 percent or more, which is expected to further boost consumption and drive low-cost manufacturers out of the country. McKinsey’s research suggests that by 2022, more than 75 percent of China’s urban consumers will earn RMB60,000 to 229,000 (US$9,000 to 34,000) a year.
With more money flowing into Chinese households, consumption levels have experienced a marked increase. In December 2013, retail sales increased 13.6 percent compared to the previous year. Chinese consumer confidence reached a record high of 111 points in the last quarter of 2013, according to findings from Nielsen, a leading global provider of information and insights into consumer behavior. Key factors identified were better job prospects and stronger purchasing intentions. Figures for tier-two and tier-three consumers in particular witnessed big jumps compared with the start of 2013. All this supports predictions that consumption will overtake investment as the largest contributor to China’s GDP growth.

According to Nielsen, the top four areas where tier-two and three consumers are using their spare cash are on new clothes, dining out, education funds, and into saving deposits. For 2013, these two tiers contributed almost half of the total fast-moving consumer goods sales. Health and wellness related sectors maintained robust growth in 2013. A few cities with huge growth potential were chosen by Nielsen as examples of the so-called “emerging tier-one cities”, including Chongqing municipality and Suzhou, which are expected to become the powerhouses of China’s future economy.

McKinsey’s research suggests that the upper middle class is poised to become the principal engine of consumer spending over the next decade, labelling consumers with household incomes in the RMB106,000 to 229,000 (US$17,538 to 37,893) range the upper middle class. By 2022, the upper middle class is estimated to account for 54 percent of urban households and 56 percent of urban private consumption.
Middle-class growth rates are expected to be far greater in the smaller and less-developed third and fourth tier cities of the north and west, where disposable incomes are rising rapidly. In particular, the share of upper-middle-class households in third tier cities is expected to reach more than 30 percent by 2022, up from 15 percent in 2002. Meanwhile, the ratio of China’s urban middle class in the four tier-one cities, i.e., Beijing, Shanghai, Guangzhou, and Shenzhen, is also expected to decrease substantially by 2022. Sustained growth in the size and diversity of China’s middle class will create new market opportunities for both domestic and international companies.

In addition to affluent and ultrawealthy consumers, McKinsey’s research finds that upper-middle-class ones are stimulating rapid growth in luxury-goods consumption, which has surged at rates of 16 to 20 percent per annum for the past four years. According to Hurun’s 2012 Report, the number of Chinese individuals worth more than RMB10 million broke the one million mark for the first time, while China’s super-rich, defined as individuals with wealth greater than RMB100 million, increased to 63,500 individuals. This means that there is one millionaire for every 1,300 people in China.

Companies should also keep in mind generational change and the effect of differently held values on the consumption behavior of China’s younger generation. According to a study on Chinese consumers conducted by the Samsung Economic Research Institute, the young new consumers of China are a unique class. As a result of the one-child policy implemented since 1979, parents are generous in giving financial support to their children, affording them more comfortable financial prospects and larger budgets.

Unlike the older generation, China’s youth have little experience with hardship and more exposure to different cultures; as a result, they are more optimistic, open-minded and individualistic, caring more about their own independence, freedom and distinctiveness. They judge themselves and others by what they buy and have been exposed to foreign and domestic brands. They love big brands and spend money to reflect their personal tastes, sensibilities and sense of individuality, pursuing self-expression in their purchases.
They are also better educated and informed than previous generations, with a broader vision of the world, motivating them to pay much more attention to environmental and social concerns than previous generations. Companies should adapt to this new generation of young consumers by differentiating their offerings and adjusting their branding and marketing strategies to attract younger consumers.

Currently, China’s retail sector is fragmented. Small independent stores dominate the retail landscape, with the top 100 retailers accounting for only 11 percent of total retail sales. For a long time, companies only set up stores in the downtown areas of first- and second-tier cities of the Chinese mainland. However, with rising rent costs and increasingly fierce competition, large retailers are gradually losing their price advantage. Meanwhile, in the wake of China’s rapid urbanization, former small and medium-sized cities have gradually developed into large cities, providing tremendous opportunities. This combination of concentration of populations and gradually improving infrastructure are attracting the attention of the international retail giants. Some retailers are therefore shifting their business focus in China from first and second tier cities to third and fourth tier cities. In fact, 58 percent of newly opened stores across China are found in tier-two and tier three cities.

Companies need to keep in mind the varied needs of rapidly expanding smaller cities. Rather than a cookie-cutter approach, companies should design city-specific solutions, including product portfolios, marketing approaches, and operating models tailored to the unique demographics and culture of these cities and the needs of increasingly sophisticated consumers.

Adapting to the China market

With higher incomes and increasing affluence, consumers are becoming increasingly sophisticated, demanding, and willing to pay a premium for better quality and unique products and services, as well as discretionary goods that are beyond the basic necessities. Competition in the consumer markets sector is also set to intensify as more multinational companies increase their presence in China. Companies should devote time to understanding what consumers are doing, how preferences are evolving, and the underlying motivations of their behavior. As the growth of the urban labor pool slows due to the country’s aging population, companies will need to enhance their efficiency and productivity by planning more strategically, providing appropriate training and improving employee loyalty, as well as utilizing high-tech equipment for automation.

In addition to the traditional physical retail stores, e-commerce and mobile commerce are both boosting retail sales. Digital marketing and in particular social media are playing dominant roles in impacting consumer’s on their purchasing decisions, with influential social media websites, such as Sina Weibo and Meilishuo, providing exposure to a tremendous variety of goods as well as opportunities to share reviews and feedback among friends and users, thus encouraging more customers to purchase online.

Given the growing importance and huge potential of the country’s retail industry, China’s retail market has become too big for international businesses to ignore. For foreign investors eager to grab a share in the booming retail market, setting up a physical retail shop in the country is perhaps the most direct way to tap into the local retail market.