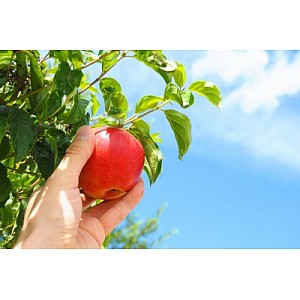 Much commentary in the media has recently been focusing on the “China slowdown” and the impact of the country’s lower GDP growth figures going forward. In reality, measuring GDP growth is always a losing game, and not a particularly good indicator of how an economy is progressing. China has had tremendous GDP growth over the past 20 years, but it has always been inevitable that this growth would begin to slow at some point. A country cannot keep expanding its economy indefinitely at 10 percent a year, it is simply not possible. Accordingly, the naysayers over China’s future when it comes to measuring it purely in GDP growth terms are misled about what is really going on. Sure, the economy is slowing, but not all at the same time, and it doesn’t necessarily mean anything bad.

The slowdown in China’s economic growth is a demographic certainty that the central government is well aware of. Twenty years ago, when I started Dezan Shira & Associates, the average age of a Chinese worker was 23. At that age, and with the huge numbers available at the time, Chinese workers were cheap; so as the global economy expanded, much of that production went to China. Today, however, the average age of a Chinese worker is 37, and that worker needs money. While at 23, a worker may be relatively content with a low base salary and some basic accommodations, that same worker, now 37, is married, has a spouse, a child, and two sets of in-laws to support, and also requires a mortgage and expenses to plan for education, holidays and retirement. This is why China’s work force has become more expensive. Quite frankly they need to! There are also less of them – China lost 200 million workers to retirement last year alone.

This is why some China-based manufacturing has been relocating. The same situation occurred with the Japanese economy in the 1980s – it moved overseas as domestic costs were so high. But in China, it is not happening all over the country, and the phenomenon remains regional. As my colleague Alberto Vettoretti, based in Shenzhen says:

“South China is indeed feeling the heat, trapped between a shrinking work force, rising costs, companies closing down, and bankrupt local governments who have not adapted. There is a survival of the strongest or smartest going on at all levels, and this is affecting the local environment. Some sectors are still doing great, some new sectors are just starting to develop and arrive, some are dead, and others are dying out.”

What Alberto describes is partly due to a shift – in South China especially – of cheap labor being driven out by high costs and relocating to countries such as Vietnam. Our firm knows this is happening because we have offices in Hanoi and Ho Chi Minh City, and many of those clients have previously been operating in China. In fact, Chinese policy has actively been encouraging such moves – the country has free trade on several thousand products with Vietnam through the ASEAN Free Trade Agreement it has signed, meaning certain products can now be manufactured at less cost in Vietnam but re-exported to China with no duties to be paid. The clever high labor cost companies are doing just this – because although the labor may be lost, China is now changing to a consumer society. That 37 year old worker is now looking to purchase products.

But back to that reported slowdown again. What has been quoted in the media is a slowdown to “about 8 percent,” yet this is a national average and China is a huge place. When a city such as Shanghai has two international airports, several huge container terminals and ports, massive skyscrapers, fantastic road and rail, growth will be slow. The city’s core infrastructure has already been built. In fact, Shanghai’s GDP growth is probably more at levels akin to 3 percent or even 4 percent, it can only now live from growth in services and consumption – which is exactly what we see. Anyone walking along Nanjing Xi Lu, Shanghai’s Fifth Avenue equivalent, will see Cartier, Louis Vuitton and Armani stores rubbing shoulders with Tiffany’s and Hermes as well as Maserati, Porsche, Mercedes-Benz and Ferrari dealerships. No one raises eyebrows or gets depressed when New York’s GDP growth is 4.5 percent (which it was last year), so no one should be surprised at such numbers for Shanghai.

However, there is higher growth elsewhere in China. Once we move inland, Chinas cities start to show figures at rates of 8 percent and above. Consider the following from 2012: 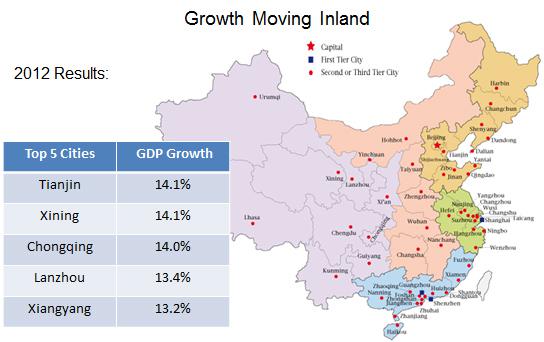 In this graphic, we can see that the GDP growth figures for other areas of China were far higher than the generally accepted rate of 8 percent. Again, I stress that what the media quote is a national average. Above, we can see that last year, cities such as Chongqing and Lanzhou posted growth rates of 14 percent. Interestingly, so did Tianjin – China’s huge coastal city near to Beijing. The reason for this is that Tianjin Port services not only Beijing (as is commonly assumed) but the entire northern swathe of China that cuts right across from east to west. Tianjin is also the seaport of choice for goods being delivered as far away as Urumqi, the capital of Xinjiang Province and the most inland city in the world. Growth is occurring, and at very high rates, in China’s central and western regions.

This is not an overnight phenomenon. In fact many MNCs have seen this coming for several years, and already have supply chains and outlets across China. KFC for example, now operate over 3,000 stores in over 700 cities in China. McDonald’s has a similar pattern, as does Starbucks. What is happening is that while the number of consumers in cities such as Lanzhou that can afford to buy a Cartier watch may not be as many as in Shanghai, they are instead upgrading their life styles in other ways, such as switching from a glass of green tea to a Starbucks latte. Instead of wearing cheap canvas pumps, people are upgrading to a pair of Nikes, or changing their pants for a new pair of Levis. This is the new level of Chinese consumerism, and this is where China’s future growth dynamic is coming from. 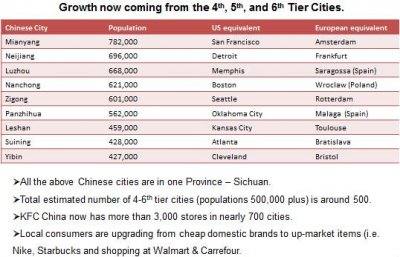 What astonishes me is that all of those Chinese cities are in just one province – Sichuan. And in total China has over 500 cities of similar size, with populations of 500,000 and above. Most are upgrading their lifestyles from traditional low-end consumer goods to mid-market products, and this includes everything from drinks and food, to clothing and white goods and beyond. This is where the new China dynamic appears, and this is where the new challenge (and opportunity) for foreign investors appears – 500 cities with populations of half a million all wanting to buy better products. Now that’s a challenge I like about the new China, and one that our global clients will enjoy as well – the opportunity to sell.

China’s so-called “slowdown” is a myth. Firstly, because it is only a statistic, and not applicable in any meaningful way in any local regions of China. Secondly, because the way to monitor an economy is not to rely purely on the GDP figure alone. And thirdly, because as the Chinese economy rebalances, new opportunities are being created. So while the low cost labor moves away to Vietnam, the 500 Chinese cities of over 500,000 people will remain where they are – a static and increasingly wealthy market to reach out to. These are China’s new, increasingly ripe, middle hanging fruit, and businesses that can adapt and pick them will do very well.

This article was first published on China Briefing. For further information visit: http://www.china-briefing.com.