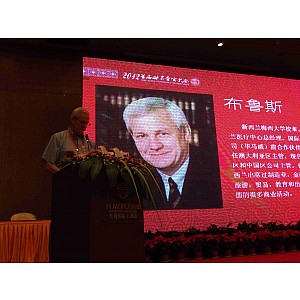 As I write this article, news has just come through of the discovery on the Indian Ocean coast of Kenya of a Chinese coin issued during the Ming Dynasty between 1403 to 1425. This suggests that Chinese explorers may have sailed to Africa in the Middle Ages, beating by almost a century, Europeans who went on to colonise the continent. The West of course is just starting to finally acknowledge the feats of Zheng He, whose fleets it seemed discovered much of the world in the first half of the 15th century, decades before any European discovery. However, the failure by the West to acknowledge the building mountain of evidence of Chinese discovery of the parts of the New World, is comparable to their earlier failure to acknowledge that the world was round and not flat!

Similarly, in my own country of New Zealand, DNA evidence has proved that the Maori race as we know it, in fact descends from tribes in Taiwan who sailed east towards Fiji and north to Hawaii and south to New Zealand and with linkages into North & South America.

Around 10 years ago, my Company, the FCS Group Ltd. developed a strategy to focus on i) inwards investment into New Zealand and ii) to bring western technologies that would benefit China.

For the first, I was introduced to Vince Ge, a Chartered Accountant with a background mainly in the aviation sector, who was living in Christchurch at the time. After 7 years in New Zealand he returned to China and we teamed up as FCS Pacific Ltd. to seek out JV partners in China and potential Chinese investors for projects in New Zealand.

For the second, we developed the concept of establishing Western styled medical centres and looked for potential partners. One interesting approach was from the Shanxi College of Traditional Chinese Medicine, one of 53 TCM universities in China. I met with Professor Feng Qianjin and a delegation from his College in Beijing, to discuss the concept and after visits to and from New Zealand, we decided to focus on the prevention and treatment of diabetes which was emerging as a major threat to the population of China.

It is estimated that close to 15% of the population of China have Impaired Glucose Tolerance (IGT) or Diabetes (mainly type 2). Unfortunately, this preponderance towards diabetes is i) in the genetics of the Chinese people, ii) partly from the One-Child policy where there are 400 million "little emperors" under the age of 18 and iii) more so from the affluence that is developing in China as the 'middle class' expands rapidly. Nowadays, there is less emphasis on eating healthy and sport and exercise and I have seen, over the years I have been working in China, the huge emergence of obesity and Western 'junk food' chains. The number of obese people in China has increased from 10 million when I first arrived in China, to more than 100 million today.

I introduced my old school friend and personal doctor, Dr. Don Dalley to the project. Don was a pioneer in sports medicine in New Zealand and had an excellent record of establishing medical centres in New Zealand. We initially had some negative comment in New Zealand from medical academics, but generally the support of combining TCM with Western methodology has been regarded as innovative and exciting. TCM of course has been around for many thousands of years and some of the herbs used in TCM, we believe, can be used for the benefit of the project. I am also keen to bring in some of my sporting connections to focus on fitness, health and eating in the schools. The Chinese Government has now recognised the huge cost of diabetes to Western Governments and is bracing itself for the onslaught of diabetes that is now hitting China.

The Chinese Government's Ministry of Science & Technology have embraced the project as a priority international JV project and we have had support from the Shanxi Provincial Government and Taiyuan Municipal Council where we are establishing the first clinic during 2013. We have also been able to establish excellent relationships with senior officials in the Chinese Government and their Department of Health. Once the first clinic is successfully functioning we intend to establish new clinics at a rapid pace. We also see the clinics as an opportunity to market a whole range of New Zealand natural products. We have also established the China - New Zealand Diabetes Research Institute as a Charitable Trust, where several leading NZ diabetes experts are Trustees and there will be a similar number appointed from the China side. It has also given us a great opportunity of involving researchers and academics from Massey University and the Shanxi College of TCM.

I am now in my 15th year of working in China. The changes during that time have been just huge:

- China has been the most remarkable example in history of lifting people out of poverty.

- The change of the economic system to a market economy and unprecedented economic growth will see China's economy surpass the USA's over the next 10 years.

- As a result of this economic growth, China's system has been able to find employment each year for 80% of its university graduates.

- There is now an emerging “middle class”, as a somewhat delayed effect of the economic reforms of 1978 - with an average age of 35 - one of the youngest in the world. Defining characteristics of this group are “optimistic” but “anxious” and working at the micro level this group is expected to emerge as a major force in the coming years. This “middle class” is expected to double over the next 15 years to more than 50% of the population.

- Retail sales are expected to increase in China by 3.5 times over the next 10 years as the 3rd & 4th tier inland cities develop, the USA's by one third, with Japan's retail sales remaining static (Economist report 3/13).

In August of last year, I was the only Western speaker invited to address the 1st World Convention of Jin Traders. The Jin Traders go back to the days of the Silk Road Traders. There were 5000 delegates present from all around the world. My topic was "Innovation and international trade - the New Zealand way".

China, never fails to surprise me. There are challenges everywhere - perseverance and relationship building which take time to develop, are essential in China. The people are warm and friendly - I have even seen replicas of the Eiffel Tower, The White House, Royal Palaces etc. It is a remarkable country, but I have relished every minute I have spent there.

If anyone wishes to make contact with me they are welcome to email me at bruce.ullrich@gmail.com