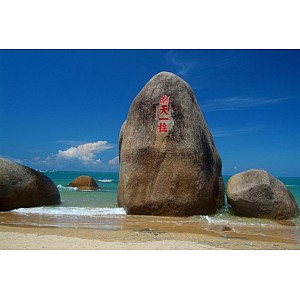 Following unexpected progress in Shenyang, in early 1999 I was invited to take part in a lecture tour organised by NZTE to various cities in China.

While in Wuhan, I met a Chinese businessman who wanted to take me to Hainan Island and show me the extraordinary opportunities and incentives offered to investors in that Island Province.

Arriving in Haikou (Hainan's largest city and in the north) we travelled to Sanya City in the south on a remarkable four lane motorway. I fact, some of my early impressions of China were of the magnificent roading system they had developed (largely financed by tolls) and Hainan Province was no exception. Hainan was China's answer to Hawaii with a tropical climate, palm trees and golden sands. There also appeared to be many abandoned projects - mainly hotels projects that had collapsed with concrete shells dotting the landscape.

I was then introduced to the Municipal Council of Sanya City who were keen to engage with me and we entered into a cooperation agreement with my Company. Sanya City reminded me of what Hong Kong was in the 1950s - in need of development, but with a beautiful harbour and with the haunting noises of the night. I could see the potential of the city which had beautiful beaches, but other than staying in the seaside hotels there seemed little for the tourists to do. It needed attractions - more golf courses & resorts, harbour cruises (we even looked at a ship to charter and provide gambling outside in international waters), and activities for tourists. I also saw potential for shipbuilding (launches, yachts etc); cold stores for growing vegetables - we even looked at opportunities like Bungy Jumping - a New Zealand invention.

The Sanya Government recommended a certain party who claimed to either own or have rights over an area of land near the Sanya International Airport. After we played our part and provided resources and people with expertise, we found the Chinese partner did not front up with his share of the funding and in fact he did not even have the rights over the land where initial planting was made. Villagers who owned the land had not been paid by the Chinese partner and fronted up at the land with weapons, threatening our staff, if they were not paid. Needless to say, we had to abandon the project at a significant loss to all those on the New Zealand side.

Subsequently, Sanya City received international attention by hosting two Miss World Beauty contests. No doubt the economy of Hainan has gone from strength to strength since then, as it is an island or huge natural beauty. This province is the southernmost part of China and situated off the coast of Vietnam, but not far from Sanya is a beach called "The ends of the earth". Ex-Emperors and others in disgrace were excommunicated here, when they were of no further use to the mainland, but in actual fact, in exile, in the most beautiful part of China!

In the course of visiting Nanchang in the early 2000's to visit an engineering works, we made an overnight stop in Wuhu City along the Yangtze River, where many huge factories were being built for the rapidly expanding motor industry in China. Some Palmerston North entrepreneurs had invested in a Go Kart project there and had invited me to have an inspection of their operation. However, there was a function centre attached to the facility and that night they had the Miss Wuhu City beauty contest. I was invited to be a judge and was informed of the marking system - not marking anyone candidate too low. I had only judged one beauty contest before when I was one of four judges to select NZ's entry in The Miss Universe contest. It was held in Christchurch and was live on television, but we had to select our winner by the time of the first commercial break - just shortly into the programme! Thankfully, the girl we selected, Lorraine Downes, went onto to win the World Miss Universe contest.

In Nanchang we signed a manufacturing deal with the Chinese engineering company to produce components for the cross-slot drill (www.cross-slot.com) which incidentally, I consider has the potential to be NZ's greatest invention .We signed a heads of agreement and a few months later Dr John Baker and I were to return to Nanchang to sign the contract and to collect the payment for the negotiated rights to manufacture. When we returned, the China side wanted to renegotiate the contract and we are still waiting for the partner to pay up the agreed sum. By this time, we were becoming totally disillusioned at wanting to work with the private sector in China and after another let down in Shenyang, decided henceforth, that we would only deal with Governments or universities. A number of visits to schools and universities followed over the next few years and the representation of a number of New Zealand schools and tertiary institutions. Until Chinese legislation changed, we were looking very seriously at the establishment of a JV International University in China.

However, during all this time we were meeting many levels of Governments in different parts of China and establishing a wide network of contacts. Invitations began to come to speak at conferences on such topics as SOE reform, International Trade and Venture Capital and Funding. Around this time Mike Moore was the Secretary/General of The World Trade Organisation and New Zealand had sponsored China's entry to that organisation and there was even talk of an eventual Free Trade agreement with China.

Wherever I went in China, with my vast background in Olympic & international sport and university education, this always opened many doors and gave me instant credibility and recognition. In July 2001 I was in a restaurant in Shenyang with a business associate when it was announced that Beijing had been selected to host the 2008 Summer Olympics. The next thing a television crew entered the restaurant seeking comment from customers and my associate summoned them over to interview me. I spoke positively on how I thought the Chinese would do a great job hosting the Olympics and that it would be a wonderful event to showcase China to the world. Incidentally, I had on a Guinness Stout T-shirt on at the time which gave that drink no doubt some free publicity on television.

Following an invitation to speak at a conference in the mid 2000's in Beijing organised by the Beijing Incubator and Business Innovation Associations, they approached me to establish an international JV consulting company, but with my Company in a minority role. We proceeded with the Company which gave us effectively access to every new & hi-tech zone, science park, innovation centre in China. Tony Browne the then New Zealand Ambassador to China came and opened our offices in grand style. They were situated in a new glass tower on the 3rd floor of Tower B of the Beijing Venture Plaza, near the new Olympic Stadium. However, the Company's focus was international whereas our interest was China - New Zealand interests, so by mutual agreement we downgraded the arrangement to a Cooperation Agreement to focus on New Zealand & China. This cooperation endures to this day and I was able to introduce them to Massey University a few years ago when they visited New Zealand. Of interest, when we first entered our new offices we found that every glass panel on the floor of the offices we occupied, showed the initials of my Company, "FCS". Thereafter, we changed the name of our Company to the FCS Group Ltd. When we visited the toilets in our new offices we discovered they had no western toilets - as an international company we soon changed that!

We would love to hear your stories doing business in China. Please contact Luke Qin luke.qin@nzcta.co.nz