Qianhai Taking RMB Internationalisation to The Next Level 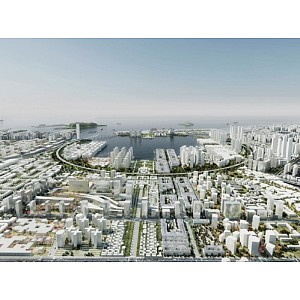 A quiet revolution is taking place across the border in Shenzhen that has the potential to change China’s financial sector beyond recognition, and with broad implications for Hong Kong.

Last month, the People’s Bank of China published the provisional rules on cross-border lending for the new Qianhai enterprise zone, opening up China’s domestic lending market to offshore competition for the first time since 1949.

Guangdong has long been the test bed for Chinese economic reform. Experiments which started in the Pearl River delta, ranging from the mainland’s first Special Economic Zone in 1979 to renminbi trade settlement in 2009, have formed the foundations of China’s transformation.

The Shenzhen authorities designed Qianhai, formally known as the Qianhai Shenzhen-Hong Kong Modern Service Industries Cooperation Zone, as “a useful exploration for China to create a new opening up layout with a more open economic system”.

Qianhai is physically and economically a relatively small experiment: the development is just 15km2 and media reports have indicated that inbound loans are likely to be limited to a total of RMB50bn, but its impact is likely to be profound.

Not only will Hong Kong banks be allowed to extend commercial renminbi loans to Qianhai-based onshore mainland entities, but the PBoC has also indicated that such loans will for the first time not be subject to the benchmark rates set by the central bank for all other loans in the rest of China.

This loosening of the capital account restrictions is not merely a means to an end – the Shenzhen authorities are predicting that Qianhai will generate GDP of some RMB150bn by 2020 – but an end in itself.

This is the first step along China’s road to interest rate liberalisation, a key milestone on the road to full internationalisation of the renminbi.

The potential benefits of the new development go beyond mere economics. When it is fully developed, Qianhai will form a bridge where the mainland can try out new accounting and legal measures, and a protected environment where international service industries can learn more about doing business in China.

In financial terms, Qianhai presents a series of challenges and opportunities to banks on both sides of the border. HSBC believes that fears that the project will drain Hong Kong of RMB liquidity are misplaced. With some RMB570bn as of Nov 2012 (Source: HKMA) currently on deposit with Hong Kong banks, the likely cap on permissible loans amounts to less than 10 per cent of the deposit pool, and the PBoC has said that it will monitor and counter any potentially destabilising fallout from the loan programme.

This new RMB financing channel will add an extra degree of depth and maturity to the offshore market, making it more attractive for investors.

We believe that the Qianhai experiment would help boost both the RMB loan business and cross border RMB liquidity. The cost of RMB loans in Hong Kong, currently between 4 and 5 per cent, is typically 100-200 basis points cheaper than on the mainland.

Qianhai represents significant progress in China’s three-step programme towards full convertibility of the renminbi. The redback is well on the way to becoming a significant trade currency; the ongoing relaxation of capital controls, represented by Qianhai and the Renminbi Qualified Foreign Institutional Investor programme, signal that it is well on its way to becoming a global investment currency.

The renminbi as global reserve currency is still some way off, but Qianhai is another clear indication, if one was needed, that Beijing is not intimidated by the challenges of reforming the financial sector to achieve its aim.

The above material has been provided for general information only and does not constitute personalised financial advice. No consideration has been given to the particular investment objectives, financial situation or needs of any recipient. Readers should seek independent legal/financial advice prior to acting in relation to any of the matters discussed in this publication. No guarantees are given in relation to the accuracy or completeness of this information. No member of the HSBC Group is liable for damages arising out of reliance upon this publication. Any opinions in this document constitute the author’s present judgment, which is subject to change without notice.

Issued by The Hongkong and Shanghai Banking Corporation Limited incorporated in Hong Kong SAR, acting through its New Zealand branch.