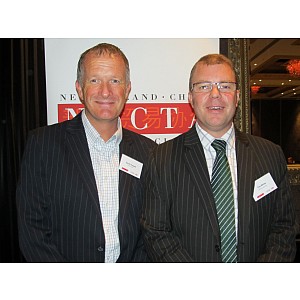 “China is a deep market with many niches and segments available to exploit,” he said.

“The challenge is deciding what strategy to deploy then to clinically start executing it.

“I experienced the perfect tradeable product – you buy it, you sell it, and they want more.” Mr. Caselli said revenue growth in the sales of food products he was referring to expanded 35 per cent month-on-month.

“The options for food products are nearly limitless; anything is possible, but not necessarily as we want to sell them,” said Mr. Caselli who is currently a senior consultant at Martin Jenkins & Associates.

In New Zealand interest in trading with China is expanding just as rapidly judging by applications being received for membership of the NZCTA.

“During the year members attended 30 networking and educational functions

and hosted over 25 delegations from China,” Chairman Tim White reported to the association’s AGM.

“In the coming year our focus will be on increasing the number of events in Wellington and Christchurch, and the 2013 China Trade Awards on 30 May next year,” Mr. White said.

“Last week I met with Vice-president Ma of the Canton Fair where we signed a Memorandum of Understanding which will result in numerous benefits for members of NZCTA-led delegations to Guangzhou and the Fair.

“As Chairman of NZCTA I am also on the newly formed NZ China Council – members have a voice on the Council.”

“We look forward to continuing to build on our strong relationship with the New Zealand Ministry of Foreign Affairs and Trade, and NZ Trade and Enterprise, and I would also like to recognise the support the Association has received from the Chinese Embassy and both the Auckland and Christchurch Consulates.”

Re-elected after the 2 year term served: