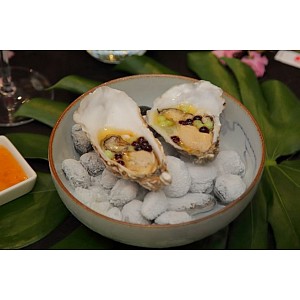 Give me quality and convenience top Chinese Restaurateur's message for NZ

When Da Dong walks into the room, the conversation stops and all eyes are on the man who has transformed one of the tired staples of Chinese cuisine – roast duck – into a cool and highly profitable restaurant chain. He’s looking to strengthen the place of Peking Duck in the international cuisine firmament, but he also wants to integrate more international ingredients into his menus, and therein lies a huge opportunity for New Zealand suppliers who offer the right products in the right way.

He’s a big man – Da means “big” and Dong is his surname, so everyone calls him Da Dong. But his shaggy hair, workmen’s boots and unusual black jacket mark him out as someone who creates rather than follows trends. From one small restaurant in Beijing, he has expanded to a chain of a dozen venues across China in just one decade, and is planning on opening restaurants in New York next year and Auckland the year after.

Da Dong is one of a handful of people who could take Chinese cuisine to a whole new level internationally, and one reason for that is his very hands-on approach when it comes to suppliers and ingredients.

We asked Da Dong about what New Zealand suppliers need to do to get their products into his kitchens.

How much do you use imported ingredients?
Our menu includes many different types of dishes, a large variety of foreign ingredients and a wide range of cooking techniques. Da Dong restaurants are what they are today because we want to use the best quality, safest and healthiest ingredients. So Da Dong restaurants are good Chinese restaurants first — and we must maintain the good tastes of Chinese cooking — but we also want to combine the good tastes of China with the best foreign ingredients. That includes New Zealand veal, which has been consistently selling well (other restaurants ask where we get it from). New Zealand's black gold abalone, lobster and shrimp are particularly good.

What should suppliers do to become long-term providers to your restaurants?
If an overseas supplier wants to talk with us, first of all they need to have very good products that align with the unique character of their country of origin. Take New Zealand lamb chops for instance – they need to be of high quality and better than the Australian ones. We also have to consider price because, even if your product is good, if the price is high, my restaurants have to pass this down to their customers.

Also, New Zealand companies need to teach me how they would prepare venison, for example, or lamb chops. More simply, what low-temperature methods would you use to bring out the taste of venison? Give me the ingredients, and also give me a few cooking styles, which I can adapt to suit Chinese tastes.

Over the years I have been to many places to look at ingredients. Spain for pork, the Netherlands for vegetables, France for wine — but I’ve never been to New Zealand. Companies should be constantly organising trips for chefs to see products for themselves. I would suggest that New Zealand companies choose a few restaurants that are influential in the Chinese market, and invite the chefs to New Zealand. Pay them a visit in China as well to see what else they might need; build those relationships.

The Chinese market has changed very fast. What new trends are you seeing with consumers?
China has been changing and opening up for many years now, and the growth in people’s spending power is a big trend. People are travelling more, broadening their horizons, and consumption patterns are becoming more varied. While China’s consumer market and GDP growth have slowed down a little, overall spending power is growing. As a result, the entire food and beverage consumer market in China is going through a transformation. Of course, the online retail models are having an impact — and people’s tastes are changing — but there have also been changes to how restaurants are managed and branded. I think this transformation of the Chinese restaurant market will be a big trend for some time.

What changes do you see in eating habits?
Big banquets used to be a very formal occasion, but now we see people interested in smaller restaurants. These smaller, fashionable restaurants are taking an increasingly bigger share of the market by paying attention to quality, style and atmosphere, as well as their diners’ changing tastes. While restaurants are aware they need to maintain traditional Chinese flavours, people are interested in trying some new ideas.

Suppliers are increasingly involved in the specific logistical issues of getting product to the client. What suggestions do you have, based on your many years of experience?
When I’m talking to a New Zealand supplier, I want to know if it is possible to provide product tailored to Da Dong’s requirements. For example, if we use 500-gram portions, can you give us a 500-gram finished product? Can the product, if being exported frozen, arrive with one day’s average daily usage amount pre-thawed? Can the product be provided in an already-processed or semi-finished state so we are no longer dependent on the chef or on warehouse management and can eliminate the need for storage? For example, Chinese chefs might not be familiar with some cuts of meat so there can be a lot of wasted product when chopping meat to trim tendons and remove excess fat. Working with the supplier in terms of logistics, storage and processing means both sides will benefit. This is my hope.

What are your expansion plans for Da Dong restaurants?
Starting last year, we have completely remoulded the Da Dong brands – Da Dong, Little Da Dong, and Da Dong Roast Duck Hamburgers – basically fixing them as high, middle and low-level brands. It has taken more than a decade to mould these brands in terms of quality and reputation, but during this time Da Dong has gained a certain level of visibility both domestically and abroad. This year we’re opening the first contemporary Chinese restaurant in Times Square in New York, and we plan on opening a Da Dong in an Auckland hotel in 2018. We’re going to be using a lot of New Zealand ingredients so we want to develop good relationships with local New Zealand suppliers.