Overcoming the challenges of doing business in China 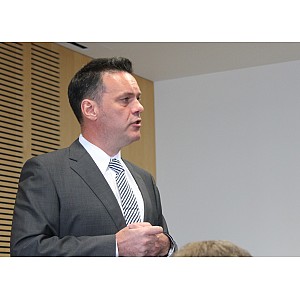 Cracking the Chinese market is often viewed as the holy grail for New Zealand businesses, but too often they are blind to the challenges of doing business on the ground.

This is the view of Jeremy Sargent, a legal consultant in Guangzhou whose presentation Overcoming the challenges of doing business in China was the latest in the Asia New Zealand Foundation’s Speaker Series talks (in association with NZCTA & NZTE).

Sargent says business owners need a well-thought-out game plan to ensure they don’t waste a lot of time, money and resources trying to set up shop in China.

The UK-native, who speaks Mandarin fluently, has been working as a lawyer in China since 1998, and he set up his own legal consulting firm around ten years ago.

He is an expert at helping businesses successfully launch in the Chinese market, and getting them out of any trouble they may find themselves in once they’re there.

Too often people make the mistake of “getting a bit carried away with it all” – they see the dollar signs and forget basic, good business principles, he says.

His first tip: people need to stop thinking about China as one big market and more a collection of individual markets. Culturally, historically, and economically; “it’s this huge patchwork”, he says.

“Understand that, unless you’re a Fortune 500 company, you’re never realistically going to attack the whole market at once…A business plan is therefore totally and utterly essential."

“I know this is commonsense, but you would be amazed how many people don’t get their head around that on day one."

Sargent, who has also built up a chain of restaurant and bar outlets in his Chinese home town, says the sheer size of China can quickly create a bottomless pit for the resources of small and medium businesses, and even the big guys can flounder. Western-branded spirits, for example, have been trying to crack the China market for some time but still only make up between one and two percent of top-shelf consumption in the China market.

“So if you’re Bacardi or Johnny Walker or whoever, you’re still scratching the surface and you’re putting a tonne of money into China and trying to build brand and build market. And these are Fortune 500 companies. Imagine if you’re a $5 million Kiwi company also trying to build a market in China.”

His advice to business owners is to figure out early on why they want to enter the China market and what they are expecting to achieve, and then be realistic, measured, and take a step-by-step approach to achieving their goals.

Part and parcel to this is having a sensible handle on the rising costs of doing business in China.

“There are people who still think China is a low-cost market when they do their sums on the back of a beer mat. Let’s get away from this idea that everything is cheap and cheerful, because it isn’t. And if you do go cheap and cheerful, you’re likely to get pretty poor results.”

Sargent says too many foreign companies establish a China office without investing resources, time or energy into the people who staff it, and he has seen it come back and bite them.

“We deal with a lot of clients, who have set up businesses in China, and they’ve sort of created a small monster and they don’t know what to do with it. There is a big disconnect between the home office and the China operation.”

He has seen great results achieved by focusing on the people in his business and developing the soft and hard-skill sets of his staff, and it pays off.

“They work very hard, they are passionate - all those things a lot of people say are very hard to find in China.

“By focusing and nurturing, you see good results really quickly.

Despite the hurdles, Sargent also warns of getting sucked into China rhetoric.

“People will say ‘Oh well, in China everything is so difficult, nothing is clear, the rules aren’t clear’.”

But he encourages an open mind. He says things may not be black and white, and the uncertainty can be challenging. However, a big grey area within which to operate can be an opportunity as well.

•    Find out about the Asia New Zealand Foundation business programme

Asia New Zealand Foundation, in association with NZCTA & NZTE co-organised a session with Jeremy on November 2, 2015.