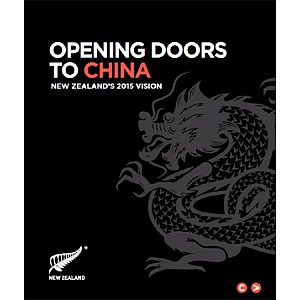 Prime Minister John Key launched a formal strategy on 3 Feb to improve ties with China, including more investment from Chinese SOEs, and attracting more Chinese students and tourists. “The Strategy is built around developing the trade and economic links between New Zealand and the People’s Republic of China. Both countries understand that a strong export base and comprehensive engagement in the international economy are key elements in achieving economic growth, and boosting the welfare and future prospects of our people.” Mr Key said in the forewords of the “Opening Doors To China” publication prepared by New Zealand Trade and Enterprise and the Ministry of Foreign Affairs and Trade.

This publication can be accessed at the link below.

Chinese investment in New Zealand is tiny compared to Australia and needs to grow “to levels that reflect the growing commercial relationship with China,” the government says in its NZ Inc strategy for engagement with the world’s fastest-growing superpower.

Investment into China by New Zealand firms is also minuscule, at $541 million, compared with $36 billion of Australian investments in China, partly because of New Zealand’s wider track record of exporting commodities for others to process rather than investing in its own high-value production.

Part of the problem, the strategy says, is that “Chinese investors are unaware of New Zealand opportunities”, with resources to improve two-way understanding of commercial opportunities to be beefed up by, among other moves, establishment of a high-level New Zealand China Council.

The relatively small size of investment opportunities in New Zealand was also a factor in limited Chinese inward investment, as well as the strict controls that apply to Chinese companies seeking to invest outside the Chinese mainland.

New Zealand firms’ inexperience of Chinese markets was a major reason there was not more investment flowing from this country into China.

While China invested approximately US$60 billion globally in 2010/11, Chinese-owned assets in New Zealand amount to only NZ$1.87 billion in total, compared with $100 billion invested by China in Australia.

The strategy says “New Zealand would benefit from increased foreign direct investment from China and outward direct investment into China”, but avoids overt comment on farmland sales or other politically contentious issues that are understood to have delayed the strategy’s release by anything up to a year.

On the trade front, the strategy seeks to build on the 152 percent growth in New Zealand exports to China since the free trade agreement negotiated in 2008 kicked in.

The strategy sets a new three year goal of doubling two-way trade in goods with China from $12.7 billion at present to more than $20 billion by 2015, with government targeting of 50 fast-growing, profitable New Zealand companies in China, priority for sectors with high growth potential, and by growing the base of “China-ready exporters.”

While the strategy promotes more New Zealanders learning the Chinese language, Prime Minister John Key indicated after the launch that this was not so far a priority of government education policy.

Also targeted is 20 percent growth in the booming market for Chinese students to study in New Zealand, and a 60 percent increase in tourism by 2015. Other service industries with potential were identified as architecture, consulting, IT, environment, and food safety services.

The education target will be assisted by investigating mutual recognition of professional qualifications and extending the number of New Zealand private training enterprises listed by the Chinese Ministry of Educations “Study Abroad” website.

A further leg of the strategy targets greater collaboration in scientific research and development.

One of the strategy’s main recommendations is that New Zealand needs unified branding in China, where belief in the country’s safety, beauty, and purity was widespread, but individual firms were unknown.

“What we can and should do is market NZ Inc as an umbrella brand…for all New Zealand products and services in the first instance and then individual brands to be covered by this big umbrella,” Michael Gan, chairman of Sino-Kiwi firm Richina told some 200 invited guests at the strategy launch on Auckland’s waterfront.

A Uniliver board member, Gan said the multi-national company had adopted this single brand approach to good effect in China “because of unique challenges and opportunities China demanded.”

“The results are spectacular. New Zealand should do the same thing.”

The strategy document says work is under way now to create unified NZ Inc branding that preserves value in other existing country and firm-level branding.

The strategy also targets opportunities for Maori business, with a push on to establish a beach-head for such opportunities in the south-western Chinese province of Guizhou.

The Government will boost the number of business delegations it leads to China and will set up a body similar to the US - NZ Council aimed at promoting the relationship through leaders in academia, business and the public sector.

The China strategy is the second in a series of formal strategies drawn up to develop bilateral relations. The India strategy was released last October. Other strategies under development are for the United States, Australia, south East Asia, the Middle East and the European Union.

Mr Key said New Zealand was on track to reach the trade target set by him and Premier Wen Jiabao in 2010 - to double two-way trade from $10 billion to $20 billion by 2015.

"We can't engage with China just on the trading front - we need to work across all sectors to build the range of links that will enhance our understanding and familiarity with one another."

The strategy identifies the education sector for greater focus as well to meet a goal of doubling the economic value of export education services to $5 billion by 2025.

China is at present the largest source of foreign students in New Zealand with about 21,000 enrolments in 2010.

It estimates that Chinese students add about $600 million annually to the New Zealand economy.

The newly launched 2015 China Strategy will need a $50 million investment to fully deliver on the Government's goals.

That was the estimate put in front of the business community when Ministry of Foreign Affairs and Trade officials road-tested their developing strategy last year.

The "whole of Government" effort was expected to involve about 200 officials - diplomats, trade officials, science, education and investment advisers, customs, police and more - when brought to fruition.

This is alongside a new Beijing Embassy to project New Zealand's identity in the Chinese capital.

Foreign Affairs Minister Murray McCully has confirmed to the Business Herald that Ambassador Carl Worker and his team will shift to an embassy vacated by another mission while a new one is built.

McCully did not disclose the cost of the new embassy. He said all options - including shifting to a site outside the prime Chaoyang diplomatic district - were considered. "It was not a frivolous decision."

Despite the controversy over Shanghai Pengxin's $210 million investment in the Crafar dairy farms, Key did not shy away from welcoming more Chinese investment.

McCully also unveiled plans to launch a New Zealand China Council in time for the first "partnership forum" between the two nations. This is expected to take place in Beijing later this year, about the time Key makes a formal visit to China to commemorate the 40th anniversary of diplomatic relations.

Council members will be drawn from business, the public service, academics and the sporting and cultural worlds. A bilateral dialogue involving the Treasury and Reserve Bank is also planned to build a stronger understanding of each country's finance and economic policy positions - something of considerable importance given China's stated intention to invest in New Zealand government bonds and infrastructure - particularly the rebuilding of earthquake-hit Christchurch.

The China strategy has sat in the Government's top drawer since April.

Entrepreneur Richard Yan, head of Richina Pacific, announced plans at the launch to build a centre in downtown Shanghai where New Zealand firms could display their wares. He said Chinese desire to invest in this country was strong.

And in a barely disguised serve at dairy giant Fonterra, he made it clear that the real opportunity was to put high-value branded products into the Chinese market instead of selling commodities.

But he said a "major mindset change" among many Kiwis towards China was needed if New Zealand was to genuinely take advantage of the great political relationship the two countries have.

* Grow services trade (education by 20 per cent, tourism by at least 60 per cent).