Hastings gets star treatment in China 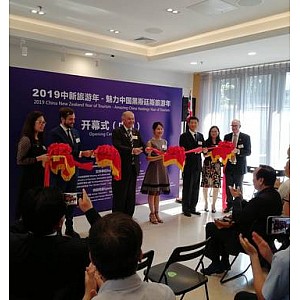 Photos and videos of Hastings have spread far and wide across China over the last two days, after the Beijing launch of the Amazing China-Hastings Year of Tourism went off with a bang.

Dignitaries from across China and representatives from eight of the country’s major media networks gathered at the New Zealand embassy in Beijing on Tuesday.

They heard how the Amazing China-Hastings Year of Tourism would help develop relationships and cultural understanding between China and Hastings, expanding trade and tourism opportunities.

More than 20 cities and regions in China will exchange gifts with Hastings, with the Chinese gifts forming the basis of a competition for Hastings high school students, in the same vein as the previous Amazing China Face Race competitions.

Hastings District councillor and project director Kevin Watkins led the presentation and said the response was “fantastic . . . We had huge banners showing off the most beautiful parts of our district and images from our previous Amazing Face Race competitions. Everyone wanted photos in front of those banners. The atmosphere was fantastic.”

Each of the guests received gifts from Hastings, courtesy of Rockit Apples, Arataki Honey, Lillybee wraps and Paritua Wines.

“We had a marvellous response from everyone; the guests, media and the embassy staff. It was only the embassy’s second event in their new building, and they were rapt with how it went.”

Media coverage had been excellent, he said. “We’ve had television coverage, major newspaper stories and on-line coverage, including The Beijing News, Global Times, Hainan Television and a travel channel, showing off our beautiful district and the project.”

And there is more to come, with further channels requesting videos of Hastings.

All of the regions of China have been invited to partake in The Amazing China-Hastings Year of Tourism. It will see cities and regions exchange a ‘treasure chest’ with Hastings.

Hastings’ treasure chests will hold a gift representing Hastings, after which the participating regions and cities in China will send a chest to Hastings containing something that uniquely represents their area. So far more than 20 cities and regions had registered, covering more than half of China, with more expected.

Once in Hastings, the Chinese treasure chests will be displayed, initially unopened. “There’s a very special reason for that,” said Mr Watkins. “They will form the core of a competition for our secondary school students, who will need to match the gifts to the appropriate city or region.”

The first three students to get them right will win trips to China.

For New Zealand, “it is an opportunity to showcase to China what makes Aotearoa a world-class destination: Stunning national landscapes, unique experiences and products, and maanakitanga, our warm and friendly Kiwi welcome”, Ms Ardern said.

For Hastings, it is about building cultural understanding on which tourism and trade relationships can be developed, said Mr Watkins. “Given Hasting’s strong ties with China – we were the first city to form a sister-city relationship with a city [Guilin] in China - it made sense for us to make the very best of this opportunity,” he said.

The district has strong economic links with China, through horticulture exports and international education, and many friendly-city relationships.