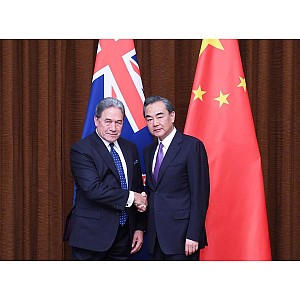 Deputy Prime Minister and Minister of Foreign Affairs Winston Peters ended a three day visit to China with an agreement for future high level visits between the two countries to maintain and build on the bilateral relationship.

Mr Peters was the first coalition government Minister to visit to China this term.

“Our discussions were wide-ranging, covering all aspects of our bilateral relationship. We reviewed the ongoing growth of our trade and economic relationship, and we were pleased to confirm dates for the next round of our FTA upgrade discussions, which will take place in June,” said Mr Peters.

“We had excellent discussions on issues of direct relevance for peace and security in the Asia-Pacific. We talked at length about recent developments in North Korea, and resolved to stay in close touch as we continue to encourage all parties to find a path to peace and stability on the Korean peninsula, including through the North complying with all relevant UN Security Council Resolutions,” he said.

“We also had a useful exchange on climate change, and agreed to further high level exchanges on this shared area of concern”, Mr Peters said.

Mr Peters also made a visit to the construction site of the new New Zealand Embassy in Beijing. In his capacity as Minister of Racing, Mr Peters also met with senior representatives of China’s racing industry.