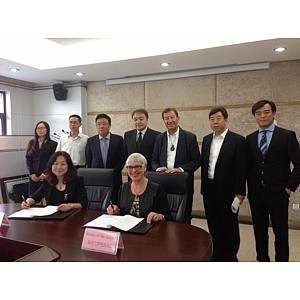 Rotorua mayor Steve Chadwick says a memorandum of understanding she signed in China, while key-note speaker at a tourism conference, will help Rotorua reach its goal of an annual $1 billion tourism spend in the district by 2030.

Mayor Chadwick, pictured on Friday 27 May signing the memorandum of understanding with Wang Fei the Director of the Zhengzhou Airport Economic Zone, says it will strengthen the tourism cooperation between Rotorua and the Chinese province of Henan. It will enable more Henan people to learn about and understand Maori culture and vice-versa.

“It will also advance a cultural relationship between China and Rotorua and is an excellent follow-up to a previous Ministerial delegation and a visit last year by former Maori Party co-leader Sir Pita Sharples.”

Rotorua MP Todd McClay said he was committed to working with Rotorua Lakes Council and its newly-formed Economic council controlled organisation to attract funding to assist with the memorandum of understanding and would work to attract funding particularly from the new money allocated to regional tourism in the Budget.

The common goal is to promote and contribute to a ‘Henan-New Zealand Tourism and Cultural Exchange Programme’.

Henan is the most populous province in China with more than 100 million people and is also an important big economic province. Its gross domestic product (GDP) ranks the fifth in China, it is the birthplace of Chinese civilisation and also the province with the most developed tourism resources.

Last year more than 20,000 people from the province visited Australia and New Zealand.

The memorandum includes a student exchange offer which is yet to be developed and could build on what Rotorua is currently doing in its schools, said Mayor Chadwick.

“China has untapped potential and the country’s economic ties with New Zealand are predicted to rise a further 20% by 2030. This step will help Rotorua reach our billion dollar aim by 2030.”

The memorandum of understanding between Rotorua and Henan is:
1.  Both sides will join in efforts to promote and increase the possibility of charter flights service with non-stop flights between Zhengzhou and New Zealand, to make promotion and publicity of New Zealand’s tourism and culture in Henan and its surrounding areas and to promote the publicity of Henan’s cultural tourism resources and tourist routes in New Zealand. Both sides will strive for more cultural exchanges and cooperation.

2.  Both sides will join in efforts to promote and increase the possibility of facilitating the visa application of the participants in this programme.

3.  Both sides will join in efforts to promote New Zealand’s unique tourism resources, particularly Māori culture, and to enhance the advantages and attraction of New Zealand’s tourist routes.

4.  Both sides will join in efforts to strive for the support of all parties concerned and reduce the operation cost of this programme in order to improve the market influence and competitiveness.