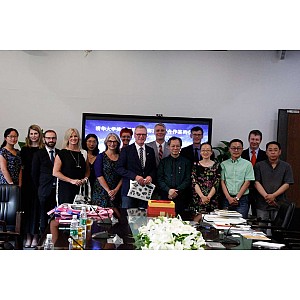 A ground-breaking first bilateral exchange agreement between Massey University and a Chinese institution has been signed in Beijing.

The student exchange agreement between China’s number one ranked Art and Design School, with a global QS ranking of 23, and Massey was signed on 31 May, the first day of a week-long visit to China by Vice-Chancellor Steve Maharey and senior Massey staff.

The signing, with the Academy of Arts and Design at Tsinghua University in Beijing, unites the fortunes of two universities with similarities beyond their shared vocation in disciplines such as fine art as well as fashion, digital industrial and textile design.

During talks preceding the signing Dean of the Academy of Arts and Design Mr Lu Xiaobo outlined how becoming a university had financially benefited the Academy with investment in the institution rocketing from an equivalent of NZ$400,000 to more than NZ$30 million.

He said international companies such as Google had helped fund digital research at Tsinghua University and there was a potential opportunity to work with Massey on future research projects in the city of Qingdao.

Mr Maharey noted that the collaborative spirit reflected in the bilateral exchange epitomised the creative and innovative ethos of both universities. “Creativity is one of the most important things for any country to promote in the 21st century and I know you feel the same.”

Massey’s Wellington campus and the Academy were both forged from mergers with polytechnics and, coincidentally, in the very same year of 1999.

Massey University first visited the Academy at Tsinghua University in June 2015 when the possibility of closer engagement was first raised. A subsequent group tour to China, funded by the Prime Minister’s Scholarships for Asia Fund, and featuring staff and 12 students from the College, then took part in a one-day workshop at Tsinghua last November.

A Memorandum of Understanding between Massey University and the Academy was also signed at yesterday’s ceremony.

College Pro Vice-Chancellor Professor Claire Robinson said the interest expressed by centres of learning like Tsinghua University in New Zealand-based arts institutions, demonstrated the importance of building partnerships and exchanges as a way of sharing ideas across the creative arts.

Massey already has agreements with Peking University, and Mr Maharey says the latest signing reinforces the long-standing and strong relationship Massey enjoys with China dating back 33 years. “China remains by far the most important partner for Massey University. We have 2000 current Chinese students and around 10,000 alumni, as well as undertaking a range of sizeable research and consultancy activities. Yet there is a good deal more than can be done.”