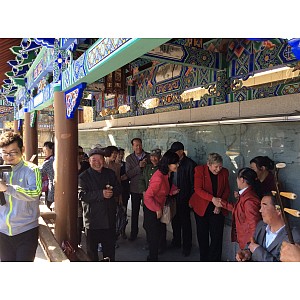 A traditional Chinese saying states 'the more the relatives visit each other the closer they will be'.

Simply, if we want to develop and strengthen our relationships with our Chinese partners, we need to visit them.

I spent 17 days visiting our 'relatives' across China in March this year.

A 35-strong delegation of education, business, trade and tourism leaders attended almost 60 meetings and events in six cities and provinces across China without a day off.

Exhausting, yes. But exhilarating and rewarding.

I met hundreds of wonderful, welcoming people from our two Chinese sister cities, Wuhan and Gansu, along with Chengdu, Beijing, Shanghai, Shenzhen and Guangzhou.

In China a Mayor is held in very high regard, which means I was able to open doors for the delegation, giving them access to officials and business leaders they may not normally have.

These are benefits not often understood, however the reaction of the first time business leaders has been very favorable.

The Mayoral delegation to China included representatives from the education, tourism and business sector with a view to strengthening and developing relations with Chinese partners.

Developing these relationships for Canterbury businesses is vital at a time when our city’s rebuild is gaining momentum and this gives us the opportunity to reiterate that Christchurch is open for business.

New Zealand has a goal of achieving greater efficiency and effectiveness across all government agencies that work in and with China.

I know some of the members of the delegation are already planning return trips to capitalise on the doors that were opened by the meetings, and sign agreements.

During our visit to Shanghai, I gave a speech at the New Zealand Consul-General reception that told how I first came to Shanghai 20 years ago as a Member of Parliament. I had called in on my way back home after the World Conference on Women in Beijing in 1995.

I visited about 12 years ago as a Minister in the New Zealand Government.

I returned as a tourist because I love Shanghai.

I had now returned on my first official visit as Mayor of Christchurch.

I told the reception Christchurch was helping to drive the NZ economy and we are doing all we can to remind people that it is not just the rebuild that is responsible for that.

There are many exciting prospects that lie ahead for Christchurch.

I'd also like to acknowledge the influence of Rewi Alley in the establishment of the relationship between Christchurch and the Canterbury region and the province of Gansu, which reminded him so much of home.

Our delegation visited the school he established, the place where he lived and the memorial where his ashes are buried.

His influence is not only the basis of the friendship between Christchurch, Canterbury and Gansu, it is at the heart of the relationship between New Zealand and China. President Xi Jinping referred to Rewi Alley and his friendship to China when he visited New Zealand last year.

I am glad our visit to China could explore opportunities with such a diverse range of industries, existing partners and potential partners, and for the chance to grow closer to our relatives.

Photo caption: Mayor LianneDalziel is pictured with local musicians after singing with them during her visit to the Zhangye Region of Gansu Province.

By Lianne Dalziel, Mayor of Christchurch