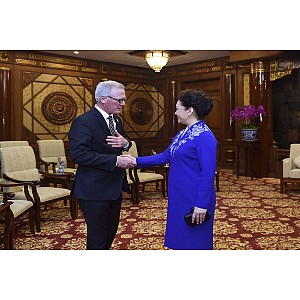 Chancellor Chris Kelly, Vice-Chancellor Steve Maharey, College of Creative Arts Pro Vice-Chancellor Professor Claire Robinson and senior university staff members were joined in China by Weta creative director Sir Richard Taylor and several Weta staff, at the invitation of Madame Peng and the People’s Liberation Arts Academy. They were there to showcase the University and Weta’s innovation across the arts spectrum as well as to experience and learn about Chinese culture and innovation.

The reception, preceded by formal talks at the Diaoyutai State Guesthouse, was attended by a Chinese vice-minister of education and senior defence staff from the People’s Liberation Army.

She said the honorary doctorate conferred on her by the University in November when she visited the College of Creative Arts was not only a personal honour but sent a message of goodwill from Massey to the people of China. Having face-to-face exchanges with Massey Wellington students who had exhibited their works had been wonderful, she said.

Earlier in the day, the delegation was warmly hosted at the People’s Liberation Army Arts Academy, of which Madame Peng is president. The academy showcased the talent of its staff and students in the performing and creative arts through a series of high-quality performances and exhibitions. Mr Maharey and Professor Robinson gave presentations about Massey and discussed opportunies for collaboration with academy leaders.

At a separate event, Mr Maharey with Sir Richard and New Zealand Ambassador to China John McKinnon jointly hosted a reception for friends of Massey and Weta Workshop at the Ambassador’s Residence in Beijing. Senior university, government and recruitment partners and senior film industry executives attended.

The highlight of the evening was the signing of an agreement between Massey and the China Scholarship Council under which the first group of more than 30 university lecturers from western China will arrive in Manawatū in late June for a three-month professional development programme on teaching agriculture.

Leading media outlets, including Xinhua, China Daily and CCTV7, have conducted interviews and provided coverage of the delegation’s visit.