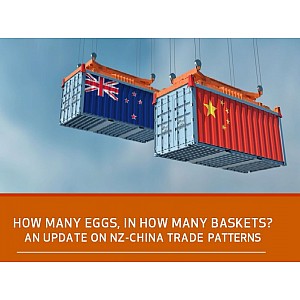 Executive Director Rachel Maidment says the report is intended to be a fact base for the debate about New Zealand’s economic reliance on China.

The report shows China took 24.2% of New Zealand’s goods exports in 2018, higher than the global average but not unusually high compared to other APEC economies such as Australia (34.7%).

“There are areas where we are very reliant on China, and there are concentration risks.  This is not surprising given our economies are highly complementary.  China wants what we produce, and specialises in making the things we want to import,” Ms Maidment says.

Report author John Ballingall from economic consultancy Sense Partners says while concentration risks exist, it is ultimately up to businesses to determine how much they export to China.

“They have skin in the game. They know these markets better than most of us.  It should be up to firms to decide where they sell, and how much risk they are prepared to accept,” Mr Ballingall says.

The report shows China has accounted for over 60% of New Zealand’s goods export growth in the past decade.  It also shows exports have diversified recently, largely due to rapid growth in a range of products over the past five years.

It identifies rock lobsters, logs and several dairy and meat products as exports with high exposure to the Chinese market.  Ms Maidment says the government can help exporters by giving them more options over time.

“We can’t simply pick and choose who will open their markets to our exports, but working to reduce trade barriers and improve certainty in other markets could lead to an “China-and” set of opportunities to find more buyers and spread New Zealand exporters’ risk.

“China’s importance to New Zealand exporters is unlikely to decrease for the foreseeable future.  Like any trading relationship, it carries risks, but exporters are well attuned to them, particularly in the wake of Covid-19,” Ms Maidment says.

The full report can be accessed here, and a podcast of a panel discussion at the report launch can be found here.

This article was first published by the New Zealand China Council.