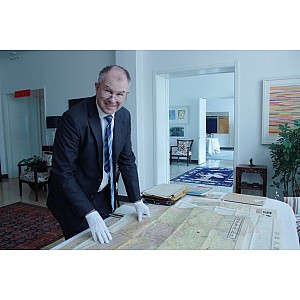 We first visited Beijing in October 1976, just a few weeks after the death of Chairman Mao and when the effects of the Tangshan earthquake earlier that year were still visible in the city. We lived in Beijing three times: from 1978 to 1980, from 2001 to 2004 and from 2015 up until this year. Each time we lived in a different city.

The most significant change was visible between 1980 and 2001. What people nowadays wear, what they drive, what they eat, the tall buildings, the highways and the expressways were all inconceivable in the Beijing of 1980.

But what had changed more was the way people thought. The China of 1976 was a closed society. Whether by its own choice or by the decisions of others, China had limited interactions with the rest of the world then, and few Chinese had met a foreigner let alone traveled overseas. It is different now, as we in New Zealand know. We have benefitted from China's reform and opening up, and we are benefitting now from the outflow of Chinese, many of whom visit our country. In some respects, these changes make China more modern than New Zealand. The ubiquity of payment by mobile phone is just one example.

New Zealand and China are very different societies. Our relationship cannot be premised on our agreeing with each other on every issue. What it can be premised on is mutual respect, mutual benefit and, increasingly, mutual understanding. I say "increasingly" because the interaction between China and New Zealand and their respective peoples can only continue to increase. More contact does not automatically mean more understanding. We have to work at that, and we will.

When I first lived in Beijing, I purchased as many contemporary maps of the country as I could. From 2001 to 2004, I turned to buying older maps of China, generally at auctions but sometimes at secondhand shops. This last time, I completed my mission not through maps but through visits. I have now been to every province level jurisdiction in China, the last one being the Ningxia Hui Autonomous Region.

There is still much to see in China. So like the godwits, I will return. Who or what are the godwits? My last visit out of Beijing was to Dandong in Liaoning, right up against the North Korean border. I was there to see the godwits. They are birds that fly between the southern and northern hemispheres twice a year. We bid farewell to them in New Zealand in March and welcome them back with church bells ringing  in September. For a long time, nobody in our country knew where they went or where they came from. Now we do, and it is a remarkable story. On their way north to breed in Siberia or Alaska, the godwits rest at the Yalu River estuary and feed on the abundant shellfish there, recovering their strength after their nonstop flight from New Zealand.

The godwits are a powerful symbol of the links between China and New Zealand, previously unknown but adding more strands day by day. They are also a symbol of a world in which we can travel freely across national borders.

This article was first published by Global Times.