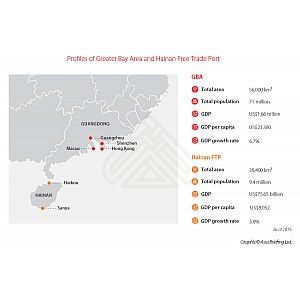 In 2018, China released its blueprint for the development of the Guangdong-Hong Kong-Macao Greater Bay Area (GBA), which aimed to integrate and transform nine mainland cities in the Pearl River Delta and two special administrative regions – Hong Kong and Macao – into an international bay area that will rival other such world-class city clusters like the New York, San Francisco, and Tokyo bay areas.

That same year, not far from the southwest of the GBA, Chinese policymakers decided to categorize the entire province of Hainan island as a free trade zone (FTZ). Recently, on June 1, 2020, Beijing rolled out a master plan, laying out a series of special policies, in a bolder move to develop Hainan into a high-level free trade port (FTP). The objective here would be to make Hainan FTP at par with other international trade ports like Hong Kong, Singapore, Rotterdam, and Dubai by 2050.

The two regions – GBA and Hainan FTP – lead China’s renewed efforts to improve its incentives, capacity, and infrastructure for investors, traders, and manufacturers – but are on different paths in terms of how they seek to achieve these development goals.

The GBA focuses on urban integration, industrial cooperation, and technology innovation within its area. So, it will concentrate on enabling the free flow of talents, technologies, and capital, which will open opportunities in the high-tech, financial, construction, and manufacturing industries.

On the other hand, the Hainan FTP aims to build a port area with more liberalized special customs supervision, which will allow free cross-border flows of trade, investment, capital, personnel, transport, and data. To improve its smaller-scale economy and develop local industries, Hainan will also release its own Negative List and provide broader market access for foreign investment in specific industries like healthcare, telecommunication, tourism, and education.

Nevertheless, the GBA and Hainan have both introduced similar preferential policies, such as lowering tax rates, facilitating capital flows and currency exchanges, and offering subsidies, to attract investors and talents. This article enumerates and compares the favorable policies in the two regions to enable investors to make a more informed decision.

On May 14, 2020, China unveiled the Opinions Concerning Financial Support for the Establishment of the GBA (Yin Fa [2020] No.95), which included 26 measures to support the financial reforms and opening- up for the GBA. The measures introduced various support mechanisms concentrating on cross-border investment and financing facilitation, financial market and financial infrastructure connectivity, and the internationalization of RMB (promoting the use of RMB currency in the GBA).

The financial reform policies in the GBA aim to deepen the financial cooperation between Hong Kong, Macao, and nine mainland cities where different currencies are adopted (the Hong Kong Dollar, Macanese Pataca, and China’s RMB) and governed under three distinct administrative systems, which becomes a sticking point for freer cash flow within the GBA. Thus, the GBA’s financial reform policies open big opportunities in banking, securities, and insurance industries and future market.

The Opinions proposed to establish the Guangzhou Futures Exchange and the Greater Bay Area International Commercial Bank, as well as optimize the improvement of financial market connectivity arrangements, such as the Shanghai-Hong Kong Stock Connect, Shenzhen-Hong Kong Stock Connect, and Shenzhen-Hong Kong Bond Connect. Cross-border bank accounts are also permitted in the GBA after the launch of the “Wealth Management Connect”.

To attract global talents to contribute to the development of the GBA and Hainan, the nine mainland GBA cities and Hainan province all introduced similar preferential individual income tax (IIT) policies – the Circular about the Implementation of Individual Income Tax Preferential Policies in the GBA (Yue Cai Shui [2019] No.2) and the Circular about Individual Income Tax Policy for High-End and Urgently Needed Talents at Hainan FTP (Cai Shui [2020] No.32).

To lower the IIT rate and offset the difference with Hong Kong, nine mainland GBA cities have introduced IIT subsidies from 2019 to 2024. During this period, the portion of the IIT that exceeds 15 percent of the taxable income paid of the qualified overseas talent will be refunded as fiscal subsidies.

Hainan FTP also lowered its IIT rate to 15 percent from 2020 to 2025, but the policy is open to both overseas and domestic talents. Moreover, from 2025 to 2035, Hainan FTP will continue to reduce IIT rates to three, 10, and 15 percent (three tax brackets) for eligible talents’ taxable income earned in Hainan, although qualified foreign or Chinese talents have to stay in Hainan for no less than 183 days a year.

The policy allows enterprises registered in Hainan and encouraged industries in Hainan to enjoy a lower CIT rate of 15 percent from 2020 to 2025; income from new overseas direct investment derived by enterprises in the tourism, modern service, and high-tech industry can be exempted from CIT; eligible capital expenditures can be allowed one-off pre-tax deductions or accelerated depreciation and amortization.

Besides, by 2035, all enterprises will enjoy the favorable 15 percent CIT rate – so long as they are in the industries outside of Hainan’s to-be-announced Negative List.

However, GBA cities have not introduced any favorable CIT policy where enterprises settled in the mainland cities may still be subject to a 25 percent CIT rate. Currently, only some free trade areas in mainland China like Shanghai Lingang New Area, Shenzhen Qianhai Free Trade Area, and Zhuhai Hengqin Free Trade Area offer CIT of 15 percent for enterprises in key industries.

In addition to the above tax breaks, as a free trade port, Hainan also imposes zero-tariff policy on offshore duty-free goods. Some of the other imported goods will also be exempt from import duties, import value-added tax (VAT), and import consumption tax (CT) before the whole island becomes a separate customs jurisdiction.

After the whole island is ring-fenced and the tax regime is streamlined, all goods – that are outside the to-be-formulated Negative List of commodities subject to import taxes – will possibly be exempt from import duties.

In addition, for enterprises engaged in encouraged sectors in Hainan FTP, their imported products can be exempted from import tariffs when entering the rest of China, provided that the imported intermediary products get added value exceeding 30 percent after processing in Hainan FTP.

Both the GBA and Hainan FTP have offered tempting incentives for the headquarters of multinational corporations (MNCs) and international organizations and senior management personnel working for these headquarters.

The GBA and Hainan FTP will facilitate each other’s development going forward so looking at them purely from the perspective of a competitive relationship will offer limited insights. The GBA, as a high-end manufacturing and modern service center, will provide international and domestic industrial chain and supply chain support for Hainan. In turn, the Hainan FTP, as a significant node of the ‘Maritime Silk Road’ under China’s Sep 9, 2020