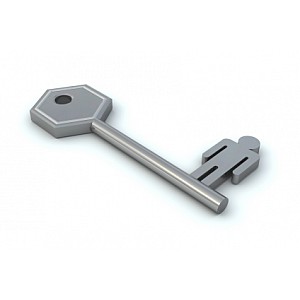 In the light of recent scandals and arrests of foreign businessmen in China, we look at the roles, responsibilities and criminal liabilities of key personnel running fully operational companies in China. Foreign executives taking up such roles should be aware of their responsibilities and the potential for criminal prosecution if they, or their company, break the law.

Of course, the roles and responsibilities of those in key positions are in no way limited to those defined under Chinese law. In is wise to keep in mind that a foreign-invested company is a subsidiary of a foreign company and therefore falls under both China’s laws and the laws of the country in which its parent company is registered.

For this reason, foreign businesses and individuals operating in China should also be aware of the stipulations of regulations, such as those covering bribery abroad (i.e. the U.S. Foreign Corrupt Practices Act).

Finally, both WFOEs and JVs need a general manager, who is responsible for company day-to-day operations. The executive director or a member of the board of directors can concurrently serve as the general manager. For JVs, several deputy general managers can also be appointed, collectively this group is referred to as the management office.

A director of the board can concurrently hold the post of general manager, deputy general manager, or any other senior management position, which also includes CFO, and any other personnel designated as such in the company’s articles of association. 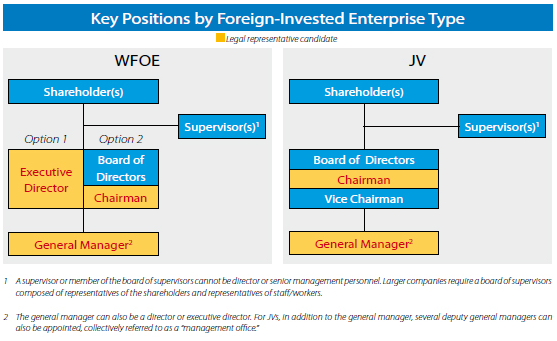 Below, we describe the qualifications and duties by role for key positions in an FIE:

The shareholders assembly, which comprises all of its shareholders, exercises the following functions and powers according to Company Law:

The meetings of the shareholders assembly are divided into regular meetings (convened on a fixed schedule as specified by the provisions of the company’s articles of association – often simply an “annual general meeting”) and interim meetings (convened when it is proposed by shareholders representing one-tenth or more of the voting rights, by one-third or more of the directors, by the board of supervisors, or by the supervisors of a company without a board of supervisors).

When the board of supervisors or the supervisor of a company discovers something unusual in the operation of the company, it/he can conduct an investigation into the operating situation; and when necessary, engage an accounting firm or other such services to assist in the work, with the entailing expenses borne by the company.

Where the shareholders assembly requests supervisors, directors or senior managers to be present at its meeting, the latter should attend the meeting as non-voting participants and subject themselves to inquiries by the shareholders.

For larger sized companies, a limited liability company in China is required to set up a board of directors comprising of three to thirteen members, which is accountable to the shareholders assembly. A board of directors should have a chairman and could have a vice-chairman, with the measures for the election of the chairman and vice-chairman of the board stipulated in the company’s articles of association.

Senior management includes the general manager, deputy general manager, and CFO of a listed company, along with any other personnel designated as such in the company’s articles of association. Qualification to Accept a Key Position

A person who falls under any of the following categories cannot be appointed as a supervisor, director, general manager or other senior management personnel of a company, according to Article 147 of Company Law:

2.    Has been convicted of any criminal offense in the nature of corruption, bribery, conversion, misappropriation or disrupting the economic order of the socialist market and 5 years have not elapsed since any penalty imposed has been completed, or any person who has ever been deprived of his political rights due to any crime and 5 years have not elapsed since the penalty imposed was completed;

•    Liability to the company

Where a breach of Company Law amounts to a criminal offense, criminal liabilities can be pursued against a director, management personnel and/or legal representative. Specifically, penalties can be imposed on the company’s officers who were “directly in charge” and/or “directly responsible” for the company at the time the criminal activity occurred.

Criminal Law does not define who qualifies as an “officer directly in charge” or a “directly responsible officer,” so it is unclear whether the shareholder, director, senior management and/or legal representative would be subject to criminal liability.

Criminal offenses under Company Law include bribery, unlawful seizure, and misappropriation of funds.

Any director, supervisor or employee of a company or other kind of enterprise who takes advantage of his position to demand or accept a relatively large bribe is guilty of the crime of commercial bribery. Where the bribe demanded or accepted is in the amount of RMB5,000 to RMB20,000 or above, it will be considered “moderate,” while a bribe of RMB100,000 or more will be considered “major.”

Any director, supervisor or employee of a company or other kind of enterprise who takes advantage of his position to misappropriate funds belonging to the company or other kind of enterprise for his own personal use or to lend to a third party is, where the amount misappropriated is relatively large and is not returned within three months, guilty of the crime of misappropriation of funds; or where a relatively large amount of such funds are returned within three months but are used to carry on activities for profit or illegal activities, is also guilty of the same crime.

Under Company Law, the officer directly in charge (who may be the legal representative) is also liable where:

When a case is serious enough to involve criminal liability, the legal representative and/or the person directly responsible will generally be questioned and investigated by the public security bureau.

Under usual circumstances, a corporation is treated as a separate legal person and directors and shareholders are not liable for the debts of the corporation.

However, Chinese law stipulates a few circumstances under which courts can pierce the corporate veil, i.e. where the courts hold the investors in a limited liability company liable beyond their subscribed registered capital for the debts of the company, in order to protect creditors of the company against fraud and unfair practices.

Liability to the Company

Another type of supervisor, director and senior management liability about which Company Law is especially specific is liability to the company.

The Company Law provides that supervisors, directors and senior management of a company should assume the duties of loyalty and diligence to the company. They cannot take advantage of their functions and powers to accept bribes or collect other illicit earnings, and should not take illegal possession of the property of the company.

Where those in key positions violate laws, administrative regulations or the company’s articles of association in performance of their duties for the company, and thus cause losses to the company, they will be liable for compensation.

According to the 2007 Enterprise Bankruptcy Law, where personnel breach their duties of loyalty and diligence and this results in the bankruptcy of the company, they should bear civil liability according to the law.

In addition, they will be forbidden from serving as a director, supervisor or senior management personnel of any enterprise within three years from the date of the completion of the bankruptcy procedure.

The Company Law also prohibits a director or senior management personnel from the following conduct, for which he/she will be liable to compensate the company for any resulting damage to its interests:

If a director or senior management personnel violates any of the above prohibitions, all wrongful earnings must be returned to the company.

In practice, there are few cases of shareholders or supervisors pursuing civil or criminal liabilities against a director or management personnel.