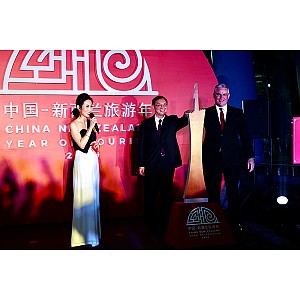 New Zealand is promoting itself as a destination for skiing among Chinese travelers, as there is growing interest in the sport in the country as the Beijing 2022 Winter Olympics approaches.

A photo exhibition on skiing in New Zealand is being staged there as well.

New Zealand Minister of Tourism Kelvin Davis attended the closing ceremony of the China-New Zealand Year of Tourism held at the landmark Canton Tower in Guangzhou on Sunday, which included cultural shows and lighting up the tower.

The yearlong event has been mutually beneficial for both New Zealand and China, and the ceremony is a celebration of manaakitanga ("hospitality" in the Maori language), a value that both countries share, Davis said.

"Highlights of the Year of Tourism are the exchange of ideas, exchange of friendships, culture-to-culture, people-to-people and government-to-government exchanges," Davis said to the media.

China has become the second-largest source of foreign tourists to New Zealand, with more than 417,000 Chinese visiting the country in 2019 as of August.

During the 12-month period ending in August, more than 100,000 New Zealanders visited China.

"Tonight we need to look at it not as the end of the Year of Tourism but the beginning of the future and ongoing relationship between China and New Zealand," Davis said.

New Zealand's Ministry of Business, Innovation and Employment estimates Chinese visitors to the country will grow to 696,000 in 2025.

By Li Wenfang, China Daily
This article was first published by China Daily.