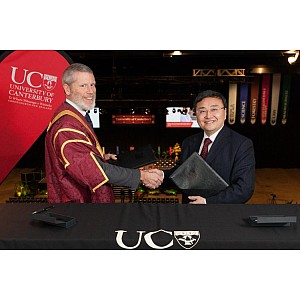 The University of Canterbury has signed an agreement with one of China’s top ranked research universities to collaborate on research and teaching.

A delegation of Chinese dignitaries and academics from Harbin Institute of Technology (HIT) Weihai, China, signed a memorandum of understanding with the University of Canterbury on 20 April at Horncastle Arena, ahead of the UC graduation ceremony of the College of Arts and College of Science.

The signing, by Professor Xu Xiaofei, President of the Harbin Institute of Technology (HIT) Weihai, visiting with a delegation of several academics from HIT Weihai, and UC Vice-Chancellor Dr Rod Carr, was witnessed by dignitaries including Consul-General Wang Zhijian and Consul Zhai Jianjun from the Consulate-General of the People’s Republic of China in Christchurch, and UC Chancellor Dr John Wood.

UC and HIT will collaborate on teaching and research, particularly in the areas of new sources of energy such as solar, wind and tidal energy, marine science and engineering, and international finance and trade.

“Linking two world-class universities, this agreement will bring opportunities for both countries’ academics and students to come together to help solve the world’s trickiest problems,” Dr Carr says.

As hundreds of students, their friends and families gathered in the Arena for graduation, Professor Xu praised the “magnificent ceremony” and said he looked forward to the prospect of HIT students graduating on such a special occasion. He agreed with Dr Carr that a strong collaboration would bring benefits for both universities, especially for the students.

“This agreement marks a great milestone between our two universities,” Professor Xu says.

“Later in the collaboration we will look to launch joint research projects, joint papers and joint laboratories. Through our cooperation we can contribute to the development of both countries’ education and economics.”

HIT Weihai’s visit to Christchurch to tour UC’s campus and sign the MOU follows a visit by Dr Carr, the Pro-Vice-Chancellor of the College of Science, Professor Wendy Lawson, and UC’s Director of International Growth Strategies, Dr Ian MacDonald, to HIT Weihai on 9 April.

Founded in 1920 and especially known for its science, engineering and astronautics, HIT is the equivalent of an ‘Ivy League’ university, ranked in the C9 League as one of the top nine educational institutes in China. HIT’s engineering school was ranked at seventh in the US News’ Best Global Universities world rankings in 2016 and 2017, and has risen to sixth in 2018’s rankings.

HIT is one of the few universities in the world to have its own space programme, and to have designed, built, and launched its own satellites. HIT has about 53,000 full-time students and around 3000 full-time faculty members.