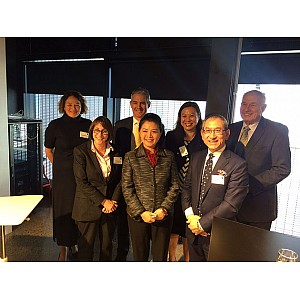 NZ China Council Board members were out in force to support the launch of the Committee for Auckland’s study “The Auckland-China Relationship: Rhetoric, Reality and Opportunity”.

Council Chair Sir Don McKinnon was joined by Board members Cathy Quinn and Arthur Loo at a Forum in Auckland on 5 October which focused on the relationship between New Zealand’s largest city and fastest growing trade and investment partner.  Chinese Consul General Mme Xu Erwen and Auckland business and community representatives attended the event at the Grid, Auckland’s innovation hub.

In his remarks Sir Don drew attention to the already extensive links between Auckland and China and the massive opportunities that exist to take the relationship to a new level.  He highlighted the need for New Zealanders to develop greater cultural understanding of China.

Cathy Quinn also emphasized the need for greater Chinese language learning and for New Zealand to lift its game in promotion of the relationship in China.  Arthur Loo recalled the rich contribution that Chinese migrants have made over several generations to the Auckland community.

The Forum focused on several key elements in the Auckland-China relationship – trade, investment, tourism, education and migration.  The Committee for Auckland report – available here - examines “the rhetoric compared to the reality” through a number of vectors and shines light on the opportunity to take a more joined-up approach to the region’s rapidly advancing relationship with China.