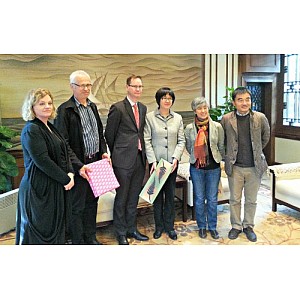 Lincoln University staff members visited one of China’s top universities recently to strengthen a landscape architecture co-operation agreement that was signed between the institutions last year.

Lincoln, Tsinghua and the Kunming University of Science and Technology (KUST), the latter of which is located in Yunnan province, signed a ‘Three Brothers’ co-operation agreement in landscape architecture last year.

The trio of institutions are all renowned for their landscape programmes and the agreement allows them to explore future collaborations on joint projects relating to design studios, symposiums and exhibitions.

The signing took place when around 30 delegates from Tsinghua and KUST visited New Zealand in December. During their trip, they attended three landscape architecture workshops at Lincoln and toured the country’s national parks to share ideas about conservation, design and resource management.

Lincoln University Business Development Manager Samuel Yu, who was part of the visiting group to China, says Lincoln’s recent trip had been an important follow-up to the 2014 signing.

“It was great to reconnect with our ‘brothers’ at Tsinghua and KUST, and with other close partners to co-operate on areas where we share common values and interests,” he says.

“Beijing and Yunnan are strategic regions for us, as land-based systems have much applicability in these landscapes.”

“They were able to captivate the Chinese audience through their unique abilities to articulate abstract ideas in a clear, concise manner that connects the design concepts to tangible value-adds,” says Dr Yu.

The Lincoln team also met with the Chief Engineer of the Beijing Municipal Administration Centre of Parks, Li Weimin, who was part of the visiting team to the University last December. He showed the Lincoln group how resources were managed inside the Beijing Museum of Chinese Gardens and Landscape Architecture, Tanzhe Temple, Xiangshan Park and Beijing Botanic Gardens.

The SoLA researchers also headed to Yunnan province to discuss design and conservation with staff members at KUST.

“We are pleased with the reciprocal discussions with all our partners so far,” Dr Yu says.