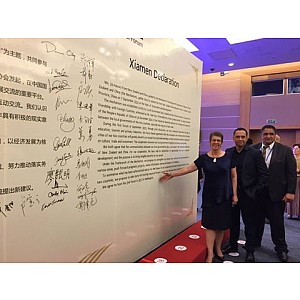 An agreement earlier this year by a Wellington delegation to China led by Mayor Celia Wade-Brown has borne fruit with the launch of the Seashine Supermarket group’s first ‘New Zealand corner’.

New Zealand products will be promoted in the supermarket chain across Xiamen and Fujian Province, occupying a prime position of 100 square metres in six stores to begin with. There is an expectation of more to come.

Seashine Group is a major player in the economy of Xiamen, a sister city of Wellington. It is one of Xiamen’s top 10 large-scale comprehensive state-owned enterprises, turning over US$2 billion in 2014 and owns 100 stores in Fujian Province, 85 of which are in Xiamen.

“Wellington’s sister city relationship with Xiamen has opened the door for New Zealand products to be promoted and enjoyed in one of China’s most prosperous regions,” says Mayor Celia Wade-Brown who visited the supermarket on 8 September.

“This is a great opportunity for New Zealand suppliers with a scale of production suitable for immediate entry to this lucrative Chinese market,” she says.

Currently there is one Wellington region-based supplier, Bemrose, with a range of honey wine and related products on the shelf. Mayor Wade-Brown says there is the possibility for smaller artisan producers to collaborate with each other and export agents to take up this opportunity.

“We can look forward to kiwi producers supplying healthy and delicious food and drink to Xiamen consumers in many years to come, bringing back vital export dollars to our communities,” she says.

There is interest in adding craft beers and all-natural sweets, the Mayor says.

The Wellington Regional Economic Development Agency will assist local producers looking to tap into this lucrative opportunity with Seashine supermarkets and other export prospects.

“Now we need to bulk up the offering,” she says. “This is giving Chinese people a taste of what we have to offer.”