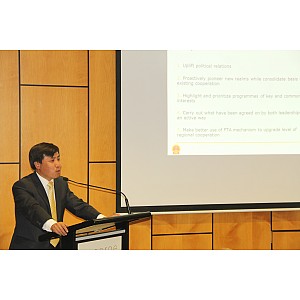 On the 28th January NZCTA in Canterbury hosted its first eminent speakers event for 2015 and we were delighted to attract a strong level of attendance in excess of 90 people.

Martin Thomson, NZCTA’s new Chairman, came down from Auckland to attend this event signalling the more focused engagement NZCTA has planned for the South Island, combined with the announcement of the regional touch point for NZCTA members namely the “Canterbury China Business Connectors” group and the development of the NZCTA Young Associates branch in Canterbury.

The key speaker at the event was the recently appointed Chinese Consul General for Christchurch, Mr Jin Zhijian, who was giving his maiden trade speech for 2015. The topic was Sino – NZ Economic & Trade ties against the background of China’s “New Normal” economic developments.

The speech gave a clear signal to attendees of Mr Jin’s thoughts around advancing trade with consideration to exports, tourism, education and other areas of pertinent interest between the South Island and China from the Consulate’s perspective.

The Consul General and key members from the Consulate, together with  NZCTA executives and key stake holders from the value-add primary sector, discussed the presentation in more detail at a private dinner afterwards.

Those in attendance recognised that under Consul General Jin Zhijain’s leadership, there will be a continuation of a very proactive engagement in identified key areas of economic interest.