A busy month of May for NZCTA In Christchurch 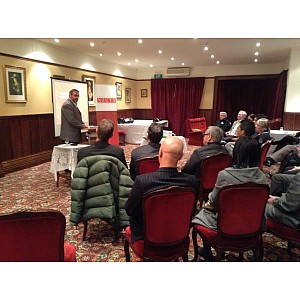 By Michelle MacWilliam
Another excellent workshop held in Christchurch for the hardy collective of NZCTA Southern attendees who have braved the first polar blast of the season to hear Pat English, Executive Officer of New Zealand China Council speak on the vision, the challenges and opportunities for those who are engaged with China. The attendees were appreciative of the opportunity to hear Pat speak and his candidness during the Q & A session where he was confident and concise in addressing the questions raised that were pertinent to sectors that the individuals represented.

The New Zealand China Friendship Society held its Annual Conference in Christchurch, during which a book “The Beauty of New Zealand”, being a Chinese poetic perspective by Mr Zhang JiChun, husband of Consul-General Madam Tan XiuTian, was launched. In attendance at the launch was Ally Cui, Assistant Vice President at Agria Corporation. This book demonstrates the commitment and involvement of the Chinese community at all levels in proactive promoting positive Sino–New Zealand relations. It is a beautiful hardcover with stunning scenic photographs, as well as being bi-lingual, available for all to enjoy.

Leading lights in our region sweep, the HSBC NZCTA China Business Awards.
Yes, Synlait is the Supreme Award winner of the 2013 HSBC NZCTA Awards and the DLA Phillips Fox Award for successful investment with China, inward or outward. Synlait Chief Executive John Penno acknowledged the awards are recognition for the tremendous achievements made by all those who have contributed to the development and growth of Synlait, staff, suppliers, shareholders and customers. Membership in the Southern region acknowledges, applauds and celebrates your success. Well done!

The next workshop guest speaker is Dr Chu Yanli, Vice Consul-General for the Consulate–General of the People’s Republic of China in Christchurch. The date will be confirmed shortly.