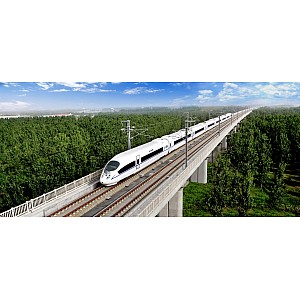 In a bid to improve its links with Southeast Asia, China is planning to build a high speed railway to Singapore. The railway as intended will travel at up to 200 km/h and run from China’s southern provincial capital of Kunming, in Yunnan, to Laos’ capital Vientiane, before continuing on through Thailand. The train will then travel to Bangkok and onward to Malaysia before ending up in Singapore. This latter section running from Thailand to Singapore is already operational, though moves to upgrade it are still in the works.

It is anticipated the main project will be completed by 2020, with line expansions into Myanmar, Cambodia and Vietnam in the future. The railway line will form part of the ambitious Trans-Asian Railway (TAR) initiative, which began in the 1960s and started taking shape after 18 countries signed an agreement in November 2006. When complete, the TAR network will involve a continuous 14,000 km railway track, linking Singapore to Turkey, with the possibility of further links into Africa and Europe at later dates.

The Road from China to Laos

The Laos government has embraced the proposal with open arms, seeing the establishment of strong infrastructure links to its neighbors as a necessity for the impoverished country’s economic development and integration within Asia. Its current infrastructure is sorely lacking, with only 3.5 km of railway track connecting Vientiane to the Thai border, and many rural roads still in poor condition. Laos’ Deputy Prime Minister, Somsavat Lengsavad, who has consistently been strongly supportive of the railway project, stressed that turning Laos from a landlocked country to a “landlinked one” would “attract more foreign investment and boost economic growth”.

Both China and Laos stand to reap substantial benefits from strategic and economic vantage points. The railway will primarily be used for transporting cargo, though it is envisaged the line could also be used by tourists. Chinese imports would be able to travel quickly and inexpensively into Laos and other parts of Southeast Asia, while natural resources from Laos (for example, potash and rubber) could move north into China. The railway would transform the Laos economy, substantially lowering the cost of its imports and exports from surrounding countries.

China has already made many inroads into investing in Laos, with projects ranging from dams, to roads, to shopping malls and housing complexes. Between 1989 to the latter half of 2013, China’s cumulative investments in Laos surpassed 800 projects with a total worth of US$4 billion, behind only Vietnam (US$5 billion) and Thailand (US$4.8 billion). In recent years, however, China has led with investment of more than US$1.32 billion for the 11 months leading up to the year ended August 2013. Thailand was a distant second with US$411 million in investments.

However, the engineering task involved in linking Vientiane to the Laos-China border will be momentous, as Laos’ mountainous terrain means that 154 bridges and 76 tunnels are required over the 420 kilometer distance. These tunnels and bridges alone cover over 60 percent of the route. Laos will need to engage Chinese engineers and construction companies, including an estimated 20,000 Chinese workers, as it does not possess the skills and technology needed to build the railway on its own.

China, meanwhile, has the world’s largest high-speed rail network and is positioning itself to export its railway technology and expertise at very competitive prices. Still, Laos will be left footing the estimated US$7 billion bill, after a joint-ownership proposal with a Chinese construction company fell through.

To fund this hefty amount, Laos has been negotiating terms of a loan with China. Laos expects to borrow US$7.2 billion to fund the project, using its untapped natural resources as collateral. The Asian Development Bank (ADB) has criticized this as being “unaffordable”, given that Laos’ GDP is only US$8.3 billion. The proposed sum makes up over 85 percent of Laos’ GDP, and borrowing it would instantly make Laos one of the most indebted nations in the world.

Other international bodies, including the IMF, have also expressed concern at the level of debt Laos will have to take on. Merely servicing the interest will require 20 percent of Laos’ annual government spending, according to Economists at Large, a Melbourne-based think tank. Despite these misgivings, most experts expect the plans will forge ahead as both China and Laos’ governments appear set on the railway.

Waiting on the Thailand “Hub”

China is waiting for confirmation that Thailand will upgrade and expand its railway infrastructure before approving the loan to Laos. Bangkok would serve as an important “hub” in the link between China and Singapore, so Thailand’s commitment to the TAR is imperative.

Last year in November, a 2 trillion baht (US$65 billion) borrowing bill, 64 percent of which covered rail-related projects, passed both chambers of Parliament. Before receiving the royal endorsement, the opposition Democrat party petitioned the Constitutional Court to rule on the bill’s legality, claiming that the off-budget borrowing was illegal. The Court’s verdict is not expected to be out for some time still.

Opponents of the bill argue that the high-speed railway would not be profitable for Thailand, and would create enormous fiscal burdens for generations. The government led by Prime Minister Yingluck Shinawatra has indicated its determination to proceed with the railway expansions, regardless of the Court’s ruling. Last month the Fiscal Policy Office said the Finance Ministry would borrow under the Public Debt Management Act if the 2 trillion baht bill is ruled unconstitutional. Transport Minister Chadchart Sittipunt added that feasibility and environmental impact studies were already being undertaken on the four intended high-speed routes.

Moreover, despite its objections to the 2 trillion baht borrowing, the previous Democrat government had also reached a preliminary agreement with China on a high-speed railway linking Thailand to its ASEAN neighbors. The previous government differed from the present Yingluck-led government on the route to be adopted, with the Democrats focusing on one high-speed line connecting Bangkok with the Laos and Malaysian borders, and the present government wanting several lines expanding domestic routes. Notwithstanding these differences, both plans are consistent with the overarching China-Singapore railway ambitions. Thus, even though Thailand faces a degree of uncertainty in the forms of both political instability and the Constitutional Court challenge, the high-speed railway seems destined to go ahead. It’s mostly a question of when.

Beyond the foreseeable benefits for China and Laos, the railway network will also have a meaningful impact further afield for both China and ASEAN.

Since China became the first country to finalize a free trade agreement with ASEAN in 2009, trade between China and the region has grown significantly. In 2013, China was ASEAN’s biggest trade partner while ASEAN was China’s third biggest partner. During the first half of 2013, the bilateral trade volume hit US$210 billion.

The annual trade volume is projected to reach US$500 billion by 2015, and last year, in a joint statement issued by China and ASEAN, an agreement was made to expand bilateral trade to a US$1 trillion target by 2020. The two sides are also commencing discussions on upgrading their existing free trade agreement.

Even though Europe and the US remain China’s largest trading partners, principal economist at the ADB, Yolanda Fernandez Lommen, states that Southeast Asia has become “an increasingly important partner from both the trade and investment perspectives.”

This article was first published on Asia Briefing.

Dezan Shira & Associates is a specialist foreign direct investment practice, providing corporate establishment, business advisory, tax advisory and compliance, accounting, payroll, due diligence and financial review services to multinationals investing in emerging Asia. Since its establishment in 1992, the firm has grown into one of Asia’s most versatile full-service consultancies with operational offices across China, Hong Kong, India, Singapore and Vietnam as well as liaison offices in Italy and the United States.
For further details or to contact the firm, please email info@dezshira.com or visit www.dezshira.com Asia Briefing.