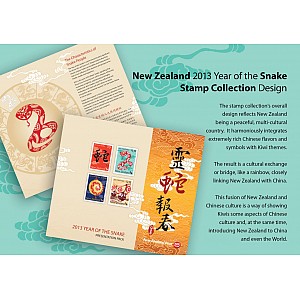 The “Business Innovation Award” winner of “New Zealand Chinese Business Elite Awards 2012” - Sophia Zhang, is a talented graphic designer and promoter of cross-cultural communications between New Zealand and China. As a former major designer of Bananaworks Communications creative team, she has contributed much to the creative design of the New Zealand Year of the Tiger 2010, Year of the Dragon 2012 and Year of the Snake 2013 stamp collections. She is also a passionate promoter of the New Zealand Post stamp products, especially the CNY (Chinese New Year) Lunar stamp collections and personalised stamp products.

These beautiful and meaningful stamp collections are officially issued by New Zealand Post to reflect the increasing cultural interaction between New Zealand and China. Sophia says that the New Zealand CNY Lunar stamp collections provide excellent opportunities for New Zealanders and Chinese to learn more from each other, as the stamps contain many significant cultural and iconic links between these two countries. Since 2012, Sophia has been travelling to most of the developed eastern areas of China, running many featured seminars, and giving multi-format interviews with the leading philatelic and public medias in China.

A well-known Chinese philatelist Mr. Dingguo Dai commented that: “the New Zealand CNY Lunar stamp collections have begun to raise more and more keen interest from philatelists also public in China as well as New Zealand, and this further promotes the keenness in China to understand more of New Zealand and its culture.”

Sophia has also successfully promoted the stamp collections as gifts in diplomatic and corporate circles:

Click HERE to download a PDF of a detailed introduction of the New Zealand CNY Lunar stamp collection and the triggered cultural exchanging events, including the design team and creative concepts. (3.3MB)

This is a video interview with Sophia made by NZWTV, which introduces her story from China to New Zealand; the creative concepts of the stamp design, promotion challenges and the implicated cultural exchanging / integration significance behind the stamps.

Sophia Zhang was educated at South China Normal University, Guangzhou with a Bachelor of Fine Arts degree and spent over 5 years as a Fine Arts teacher and graphic designer at Shenzhen Art School before immigrating to New Zealand in 1998. She has been deeply involved in countless cross-cultural creative communication projects and campaigns since 2002. Sophia has spent much of her time promoting the New Zealand CNY Lunar theme and Personalised stamp collections to the China market and met many leading philatelists in China and worldwide since 2012.

For more information about the stamps or advice on how these beautiful stamps can be used as corporate gifts to enhance cross-cultural communications and marketing please contact Sophia Zhang at sophia777xyz@gmail.com

(Article based on the NZCFS webpage article by Duncan France, October, 2013)