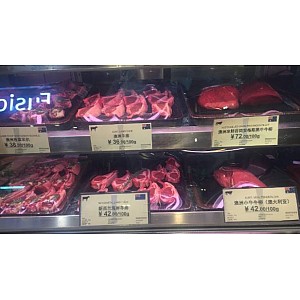 More New Zealand chilled beef and sheepmeat will be shipped to China after initial trials appear to have met with Chinese approval.

Deputy secretary-general of the China Meat Association, Gao Guan, said the trials had been promising. China suffered a shortfall in beef and sheepmeat supplies and consumption of its main meat protein, pork, has fallen in recent years.

The first shipments left mid-last year, headed by Alliance Group and Greenlea Meats. They were followed by a number of others including Silver Fern Farms.

"It would be good if New Zealand could persist in this trade. [Chinese] production happens in one area and consumption happens across China but our technology is not well developed. We have few enterprises which have the capacity to do chilled meat," Gao said.

Beijing and Shanghai consumers were far from the the northern areas where the meat was produced. At present, most animals are slaughtered and immediately eaten because of the lack of a cool chain supply.

Alliance Group has forged a long standing relationship with Harbin-based company Grand Farm. As well as importing and distributing chilled and frozen meat, it processes sheepmeat for the hot pot industry. Alliance has dispatched a new range of market-ready lamb retail packs, co-branded with Grand Farm.

James Nicolson, originally from Manchester, opened up his first up-market butchery five years ago and has also opened several more, with restaurants attached.

Grand Farm managing director Wang Zhilei said it was too early to say how well the chilled meat trade was proceeding.

"There is a lot of potential and also a lot of challenges facing the transport of chilled meat. Shelf life and logistics are key challenges, but if we can overcome these it will have a good opportunity."

"China needs more meat, and domestic producers see the trade as a positive challenge rather than negative because they understand they need to work harder and do more to grow," Wang said.

One problem to be overcome was the Chinese perception that freshly killed meat was preferable to chilled. By the time a shipment has arrived from New Zealand it is 30 days old, and is darker than the brighter red they are used to.

Alliance and other companies are hoping to overturn that perception by focusing on the grass-fed, high animal welfare and food safety theme. Much of what the Chinese produce is grain-fed.

New Zealand chilled meat does not always attract a premium over either locally sourced meat or Australian imports. Meat which goes directly into restaurants is priced at the top end, while in stores it is on a par with other producers.

Wang said it was also a challenge to price the meat correctly.

"By the time the product is in shops more than half the shelf life is gone, so you are left with a short time to sell. It's very hard to price it too high, you need to move it off quickly otherwise you can't sell it. As more channels develop, we will look into lifting the price position."

Alliance general manager of sales Murray Brown said the chilled programme was a key part of the co-op's strategy.

"Chilled is still comparatively new in China with meat either fresh or frozen/thawed. We are fortunate to have a first class platform and partner in Grand Farm. Our priority is working closely with Grand Farm to gain insights into the market and working back from the retail and food service end.

"The key is to ensure we know the market, know the value chains and supply chains to ensure the best care and management of our products. One area we are particularly pleased about is the improvements of temperature controls in the market. We are seeing some good progress there."

Alliance was shipping sea containers of lamb/mutton and beef nearly every week plus regular freight by air, he said.

"The initial response from the market has been positive, in particular, the quality of the end product. We are confident chilled will continue to develop well and increase in volume. However, these are early days and we will be closely monitoring the market."

Alliance will not reveal the exact volumes of the chilled trade, but neither will any of its competitors.

By Gerard Hutching
Gerard Hutching is this year's NZ-China Council media award winner. This article was first published by Stuff.