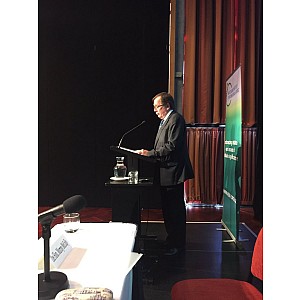 Ladies and Gentlemen, In my eight years as serving as Foreign Minister I can’t think of a more interesting time to be addressing this group.

We are entering period of global uncertainty on a number of fronts.

Populism and nationalism are on the rise in many quarters.

During my occasional visits around New Zealand I am often asked which countries I have been to where the economy is in such good shape and the political scene is so stable. The answer, of course, is nowhere.

New Zealand’s strong economic performance has provided a basis for greater political stability than we are seeing almost anywhere else.

We have one of the fastest growing economies in the OECD, with GDP growth at 3.6%.

Our unemployment rate is 4.9%, compared with 5.6% in Australia, and well over 20% in some European OECD countries.

We are about to produce our third successive budget surplus.

Australia is projecting a budget deficit of $37 billion this financial year and is aiming to reduce this to $6 billion by 2020. Meanwhile, the UK has suspended its plans to achieve a balanced budget in the face of low growth rates.

New Zealand’s economic success has been built on an outward looking approach – one that promotes open borders and free trade.

As the Prime Minister told the Institute earlier this year, ‘Fortress New Zealand’ simply doesn’t work for us.

But, internationally, open borders and free trade have become targets for domestic discontent.

We are seeing impulses to erect barriers, not pull them down.

There are two important questions for New Zealand that have arisen this year that you will no doubt focus on in your deliberations today.

First, how will Brexit and the forces that brought it about play out for Europe, and for the UK in the coming months? Both of these are of great interest to us.

And second, how will the Trump Presidency change the balances that impact on the stability and security of the Asia-Pacific region?

President-elect Trump has said that the US will not be part of TPP. But we also know that an Asia-Pacific pivot without the trade and economic substance is no pivot at all.

And whether there will be a trade and economic substance is something we will see in due course.

The answer to this question, will, in turn, impact on the evolution of the diplomatic and security architecture in the region. Especially when you add into the mix the emergence of a quite different style of President in the Philippines and the changes taking place amongst some of our other ASEAN partners.

On the basis that I have the opportunity to address the Institute about once a year, I thought I might use this as my annual opportunity to highlight a few areas of important progress in our foreign relations.

Last week I had the privilege of welcoming the USS Sampson to Auckland– the first such US naval visit in 33 years.

The ship visit, along with the visits this year of Vice President Biden and Secretary of State John Kerry, symbolise the level of friendship, trust and mutual respect that today underpins NZ/US relations.

It is worth adding to that list the huge diplomatic victory achieved by the US/ New Zealand sponsorship of the Ross Sea MPA, in which we persuaded 25 countries of widely varying interests to agree to the creation of the largest marine protected area on the planet, spanning some 1.55 million square kilometres.

So I think it is fair to say that the New Zealand/US relationship is quite different from the one we inherited eight years ago.

My recent visit to Beijing confirmed for me that the hugely important relationship with China is in good shape, but reminded me that we need to remain focused if we want to continue the current excellent trajectory.

In the eight years I have been in this role we have seen our exports quadruple, and both tourism and student numbers explode.

This is a very big, complex, asymmetric relationship that will continue to demand commitment and resource if it is to reach its potential.

The Prime Minister’s announcement at APEC that we will start discussions on the China FTA upgrade sets the scene for a new chapter of growth in New Zealand-China relations – one that will see China become by far our largest trade and economic partner.

Like middle class consumers everywhere, they want to buy quality food and beverages, and take advantage of world class education and tourism experiences.

Along with our efforts in China, Japan and South Korea, our engagement with ASEAN countries also seeks to position New Zealand to take advantage of this phenomenon.

And we continue to engage constructively in the diplomatic processes that support the stability and security of the region, especially in light of questions about the future of US engagement.

On the subject of Korea, may I just pause briefly to update you on the quite spectacular success of New Zealand exporters in the market over the past year, following the conclusion of the FTA.

I have already mentioned the importance of developments in the EU. Last month, with the European Union Vice President Frederica Mogherini, I signed a new relationship agreement, the PARC, which marks the start of our path to a strategically vital free trade agreement with the EU.

We are now well on target to conclude a free trade agreement with the Gulf Cooperation Council. Our two-way goods trade with the GCC region is worth over $3 billion annually and they are currently our 6th largest trading partner.

If we are serious about developing a balanced portfolio of trade and economic relationships, the relationship with the GCC will be of great importance as well as providing a gateway into Africa - which will, at some point, become a focus of attention for New Zealand agriculture.

While our two years on the Security Council have seen a greater level of activity in New York, we have not forgotten about our Pacific neighbourhood and I want to mention just two important examples of our work.

The cost of diesel for electricity generation, by Pacific countries, is about one third of their total import bill, or 10% of their GDP.

As a result of our work over the past five years, with the European Union and other partners, over $2 billion of renewable energy projects have been committed and funded to lead a shift from fossil fuels to renewable generation around this region.

On the other side of the ledger, the biggest asset the region has is its tuna fishery - worth over $3.2 billion last year.

But less than 15% of that value flows back to its Pacific owners.

We are now well advanced in shifting the region to a modern catch-based system that will ensure the sustainability of the resource for the future, and shift Pacific nations significantly up the value chain.

For nearly two years, as a non-permanent member of the UN Security Council, we have had a unique vantage point on the world’s ability to manage some of the most pressing security issues of our time.

New Zealand’s time on the United Nations Security Council is drawing to a close, but is not over. So it isn’t time for a post mortem of our Council term yet.

We came onto the Council vocal about the need for UN reform. And we will leave it even more vocal on the need for reform.

Throughout the course of our term, we have seen too many examples where the Council has been a silent witness, rather than a solution, to global crises.

The veto hangs like a dark cloud over the Council, and over the whole UN body, imposing its own style of paralysis and dysfunction.

Nowhere is this paralysis and dysfunction more apparent than in relation to Syria, where it is estimated that more the half a million people have lost their lives over more than five years.

That level of failure is not diplomatically sustainable.

And it is not economically sustainable.

Last year the world spent US$16 billion on the humanitarian consequences of conflict and a further US$9 billion on peacekeeping operations.

But there is a growing gap between the requests for humanitarian assistance and the funding that donors are prepared to commit. And that gap is now evident in funding appeal after funding appeal.

New Zealand will remain a very active and engaged player in multi-lateral affairs, once our term on the United Nations Security Council ends at the end of December.

It is of course in our best interest to be so.

If we are to live in a world where the big guys always win and the small guys always lose, that would be a very bad outcome for a small country like ours.

With apologies to Winston Churchill; multilateralism is the worst system for the conduct of international affairs – apart from all the others.