China - In The Beginning... 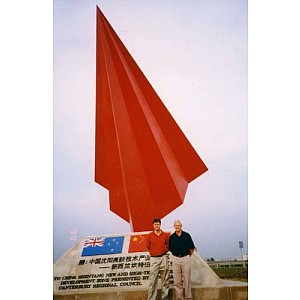 I had travelled internationally on a regular basis since 1968 on business and sporting matters, and during that time I had been a member of several International Business Councils focusing on Asia. In the 1990s I was heading a Committee that wanted to make a bid for the 2006 Winter Olympics (it would have been the first Winter Olympics to come to the Southern Hemisphere) and after several years of international promotion and lobbying we were turned down early in 1998 by the New Zealand Government for some seed funding to make the bid - for a similar amount they had given to Auckland to bid for the rather anonymous World Cup of Golf. Having received the endorsement of the New Zealand Olympic Committee and the Christchurch City Council, (subject to Government support), our Committee was devastated to be rejected, as a Winter Olympics based on Christchurch & the Southern Lakes with significant funding to come from international television, offered huge potential economic activity to the south and of course to New Zealand.

However, this disappointment created an opportunity, as I thought it was about time I visited China. I searched the internet and planned to attend an investment seminar in Shenyang, in North Eastern China in November 1998 - a city I had never heard of - but I had been a member of the Gansu-Christchurch Sister City Committee since the early 1980s which appeared to offer few economic opportunities for business & trade. At that stage I did not know anyone in Shenyang but thought I would attend this seminar and see what happened.

I was befriended by a local businessman who thought New Zealand would be a nation of investors to China and I had literally hundreds of investment proposals directed my way. I had to make it abundantly clear early on that NZ's strengths were the expertise it offered, particularly in the agri-business sector and where it enjoyed a huge international reputation and also our education system. However, he wanted me to meet the Secretary of the Communist Party for the Municipal Government which I thought was a 'one on one' meeting, but I was rather taken aback when the room I was taken to, contained around 50 to 60 people - the full Shenyang Municipal Government, their Foreign Affairs Office and their local television stations. Xu En Cai, the Secretary, directed me to one throne at the end of the room and he took the other. He then outlined the significance of Shenyang (known as Muckden up to the end of World War II), a city of nearly 7 million people and China's city for heavy industry. Shenyang and Liaoning Province were the hub for the 5 northeast China Provinces and also contained the beautiful port city of Dalian.

Shenyang had also been the seat of the Qing Dynasty that had unified all of China. I was then invited to speak and naturally spoke positively about New Zealand and the opportunities it had for China. I then invited their Government to visit New Zealand not anticipating they would take up the offer - I was badly mistaken, as within 2 months they would send a small delegation from their Foreign Affairs Office to make an exploratory visit for a full Government visit that would follow a few months later!

I outlined a suggested programme that would include visits to food processing plants, inspecting new agricultural technologies, having potential trade talks at Government level and signing cooperation agreements. When the full Government delegation would visit 3 months later, the latter would be satisfied by an investment seminar for local business leaders I would organise at the Hyatt Hotel in Auckland and a Cooperation Agreement with the Canterbury Regional Council. Several factory visits would follow in different parts of New Zealand and I even organised a sheepdog display rounding up sheep when they visited my cousin's country farm in Canterbury. All along the way we organised Maori welcomes and at the time the delegation arrived at Auckland International Airport, I arranged to get admitted to the Customs Hall and accompanied the Secretary and the delegation for the rest of their New Zealand visit. The local Chinese businessman had charged the Shenyang Government a fee for this service and when it came to sharing this fee with me, he was found wanting. This was the first of a series of experiences I was to learn the hard way when dealing subsequently with businessmen from the private sector in China. One particular member of the delegation carried a huge quantity of US $100 notes in a big leather bag and paid for the delegation's costs as they travelled throughout New Zealand.

However, on their return to China the Shenyang Government wanted us to recognize their New Zealand visit by us presenting them with a sculpture. My initial thoughts were a "table top" sculpture of a koru or something similar. I made it abundantly clear that we had no budget but they indicated they would pay and had already commissioned the Shenyang Academy of Arts to design the sculpture and incidentally, Richard Johnson, the Chairman of the Canterbury Regional Council and I would be invited as their guests of honour to attend the unveiling of the sculpture in October 1999.

Richard and I duly arrived and on the day of the unveiling were taken to this area of land on the main highway from the International Airport to the city. There was something very large covered with drapes and balloons and flanked by pretty hostesses, prior to the ceremony. Artificial grass had been laid and a large entourage of guests were seated with music from a brass band. I had also arranged for the New Zealand Ambassador, Peter Adams from Beijing, to be present. The ceremony eventually got under way and the drapes removed to reveal a 7.5 metre bright red dart symbolizing the wings of birds and the feeling of flight, on a marble base displaying the New Zealand and China flags and with the words ...'to the Shenyang New & High Tech Zone, presented by the New Zealand, Canterbury Regional Council" - all this happening 11 months after arriving in China for the first time!

Pictured: Bruce Ullrich with son Matthew by the sculpture built by the Shengyang Municipal Government to commemorate links between New Zealand and China forged by FCS.

Chairman & CEO at FCS Group based in Christchurch. Former partner in an international accounting firm (KPMG), Company Director of companies in New Zealand, China, and previously Australia, over a wide range of activities in manufacturing, financial services, tourism, trade, education and publishing.

Has travelled widely to represent New Zealand interests in business and sport - was Vice Chairman of the Organizing Committee of the Xth Commonwealth Games. Has been Chef de Mission of three New Zealand Teams to Olympic & Commonwealth Games, including Seoul in 1988, generally regarded as NZ's most successful Olympic Team ever. Held office until 1995 of Vice President, New Zealand Olympic Committee. Spearheaded a bid for over ten years to bring the Winter Olympics to New Zealand.

In recent years he has spent a considerable amount of time in China where a China wide office network has been established. He has been invited to present several keynote addresses at conferences in China and is an Honorary Chairman of several trade organizations. At the same time he has also established strong governmental & educational links in China. During 2006 he was made an Honorary Professor of two Chinese Universities. A current project with a Chinese Medical School is to establish clinics in China for the treatment of diabetes.

He has also been a long time member of Rotary International and is a Paul Harris Fellow.