My Recent Trip to China

<< Money only sleeps if you allow it to Growing together with channel partners in China – Are you ready yet? >> 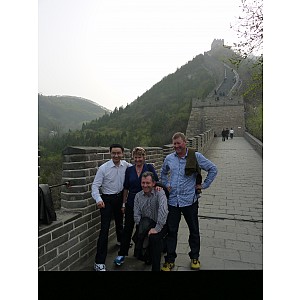 I have just returned from a whirlwind visit to China, which encompassed five different cities across the country.

Our delegation, led by the National Party President, Peter Goodfellow, and including board member Grant McCallum and National MP Jian Yang, was the guest of the Communist Party of China.

The trip was all about exchanging information; building personal and business relationships and deepening the friendship between our two countries.

We were warmly welcomed, and for countries that are so different in size, in population, and in history we found much in common.

While we marvelled at the ancient cultural heritage and modern economic growth of China, they admired the beautiful natural landscapes of our clean green environment and our healthy foods.

The visit was an opportunity to celebrate the 40th anniversary of formal diplomatic relations between China and New Zealand and the success of our 2008 Free trade Agreement, the first that China has concluded with a developed country. We also discussed New Zealand’s recently launched China Strategy which recognises the already strong and resilient economic, political and people to people relationship between our two countries and focuses on working together to drive forward science and technology linkages, and to develop further collaboration to the commercial advantage of both countries.

I also took the opportunity to thank the people of China, for their interest and support of Canterbury and Christchurch people over the earthquakes. Again it was a touchstone as, like us China has had disastrous earthquakes and understands the utter devastation communities’ face. We both shared the sadness of bereavement in the February 22nd earthquake, with twenty four Chinese students losing their lives in the city. We were able to help each other over a very difficult time. Our people and organisations supported and worked with families of the students in a special centre set up at Rewi Alley Chinese School.

The Chinese government immediately sent much appreciated Urban Search & Rescue Teams and financial support. They are also keen to help with the rebuild and we greatly appreciate their interest and support. I also thanked them for the confidence they have shown in the future of Christchurch by opening a new Chinese Consulate in the city last year. It will be a catalyst for the on-going development of friendship and business relationships.

Arriving in Guangzhou we met with Mr Wang Yang, the political leader of Guangdong region, and member of the Politburo, and considered one of China’s emerging new leaders. He talked fondly of his past visits to NZ, and the potential for tourism and other Chinese/New Zealand business opportunities. We will continue “the conversation" when he visits NZ again later this year.

Later that day we visited Shenzhen and were amazed by the development of that city in just over thirty years. It was the first of the Special Economic Zones in China and that has stimulated such growth, such change, and offers such opportunity. The area has developed from paddy fields to skyscrapers, from a farming region to a global business centre within a generation.

Our next stop was Beijing. We were treated to a cultural extravaganza which included the Forbidden City, the Summer Place, Tiananmen Square and the Great Wall. All the places that I had heard about but never seen. As New Zealanders we appreciated the depth of history of this ancient civilisation and were amazed by the numbers of people visiting the sights.

We met with a number of officials and business people but the event that stands out for me was the official lunch with Mr Liu Jieyi, the Vice-Minister of the International Department. He spoke very candidly about international affairs and global relationships in general and China’s desire to encourage peace in Asia particularly in the face of changes in North Korea.

The highlight of Zhengzhou was visiting two businesses that were joint ventures between New Zealand and China. The first was a high tech manufacturing plant making laboratory testing reactors and robotic machinery. It was fascinating to see the processing of samples from test tube to results print out without human intervention. At the second, we were asked to turn the first sod for a complex that will house an agricultural research institution. New Zealand has a proud history of agricultural research and it is very pleasing to see this expertise being utilised in China.

Our final port of call was Shanghai. A city that embraces both its European past and its fast growing, commercial future, epitomised by the Bund on one side of the river and Pu Dong on the other. Arriving by the 410 km an hour Meglev train set the scene in a city that has a vitality and pace that is truly exciting. Again we were well warmly received by our Chinese hosts and continued to explore common links and interests. Shanghai is the sister city of Dunedin and the beautiful Yu gardens which we so admired, have been recreated, on a smaller scale, by Shanghai gardeners in New Zealand.

We also visited New Zealand Central, a business hub created by New Zealand Trade and Enterprise in central Shanghai. It showcases New Zealand goods and services, in a distinctly Kiwi way and is doing great things for our exporters. China is our second biggest export market and business is growing rapidly so this office is enormously important.

I really appreciated this opportunity to visit China, and to have such wide-ranging experiences across the country. It’s such a huge expanse with so many people. So different in scale, history, culture and politics yet at an individual level we seem to have much in common. There is no doubt that New Zealand and China will continue to work together, to seek new opportunities and to develop closer ties and I look forward to being part of this on-going relationship.

<< Commentary  < Money only sleeps if you allow it to | Growing together with channel partners in China – Are you ready yet? >