<< A journey of 1000 miles starts with one step The 7.5% Growth Target. Undershooting Unlikely >> 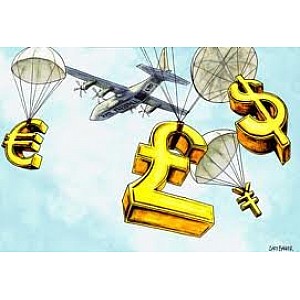 Data released a few weeks ago show that the Chinese economy’s growth rate slowed from 10.4% over 2010 and 9.2% over 2011 to an annualised pace of 8.1% during the March quarter of this year. Now one can rightly express doubt about the accuracy of figures for such a diverse and dispersed economy released much sooner after the end of a quarter than in developed economies. But nonetheless, growth has slowed and the debate goes on regarding whether China is going to have a hard or a soft landing.

A hard landing is generally defined as growth less than the 7% considered the bare minimum to soak up the 10 – 15 million people who each year migrate to the cities from rural areas looking for work and higher incomes. That migration itself tends to be one of the prime sources of growth for the Chinese economy with research showing that in the cities people tend to earn and spend some 3.5 times more than people in the countryside.

On the side of those arguing that the slowdown will not be hard are some of the recent data releases. The manufacturing sector for instance has recorded monthly growth numbers better than in many other economies for about five months now. Retail spending continues to grow at a near 14% pace and activity growth remains strong in fixed investment and even to a slightly lesser degree in motor vehicle sales.

Certain sectors seem to be powering ahead as usual such as hotel construction, and of course there is ongoing development of the health and education sectors in terms of facilities and systems, and the same with regard to infrastructure. The government also has a very strong policy of encouraging people to boost their consumption as a means of reducing reliance upon fixed investment and export markets.

And that is where those arguing for a hard landing find a major source of support. China’s growth has been driven for the past three decades on the back of foreign capital inflows aimed at China-based production for export markets. Those markets are showing some very mixed performances.

In Asia growth remains firm and in the United States growth above 2% is underway which although not stellar is not too bad. However more worrying is what is happening in China’s largest market which is Europe. In Europe a number of economies including the United Kingdom and Spain have just fallen back into recession after very mediocre recoveries form the 2008-09 financial crisis. Greece is looking increasingly likely to leave the Euro and in doing so create massive uncertainty about whether other struggling economies may leave, rising worries about stability of the still struggling banking sector, and concern about the willingness of investors to continue to finance not just still large annual budget deficits but maturities of past bonds also.

Europe frankly becomes a bigger threat to Chinese growth than the often cited housing market. There is certainly an over-supply of housing in China, but there has also been a speculative surge in prices which has now been unwinding to a mild degree (2% or so) over the past six months. The very strong desire of the People’s Bank of China and Beijing government in particular is that house prices continue to fall in order to remove one of the factors pulling apart a society where income disparity may be the greatest of all economies.

The chances seem high that in spite of a rise in the number of people in China protesting about falling prices (or more accurately the discounting by developers to cut inventories of apartments), that policies aimed at cutting prices will continue. The question is whether banks will run into major difficulties if prices fall. Some might. But the ability of the authorities to support any struggling banks is high in a country with low public debt by world standards.

The extent of bank debt problems will also be mitigated by the generally high deposits people have used for purchasing dwellings. Plus one suspects that during a year when only the fourth leadership change is occurring since the end of the civil war, financial collapse from whatever source will not gain any sort of momentum.

Therefore while there is huge uncertainty and frankly downside risks surrounding Europe, in China growth is still more likely to undergo a soft rather than hard landing this year. The bigger issue perhaps is the ongoing strength of export markets given the great number of years it will take for financial problems to settle down in the West. Worries about export markets are one factor encouraging a shift toward domestic consumption as a growing driver of the Chinese economy, and that is where rising opportunities open up for countries such as New Zealand with niche products aimed at increasingly quality and safety conscious consumers.