STRATEGY: What is the hardest part of doing business in China? 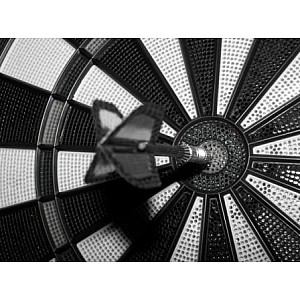 Andrew Hupert of China Solved ran a pair of surveys on Linkedin and has shared the results with us.

One survey appeared on a set of Linkedin business groups with NO specific geographic orientation and asked, “What is the most difficult aspect of doing business?”

Andrew broke down the deal process into 5 phases:

3) Finalizing the deal – signing the contract

He then ran another survey with the same answer choices, but which phrased the question slightly differently – and targeted China-oriented business groups. This time the question was: “What is the most difficult aspect of doing business IN CHINA?”

Results from the first (general) question were: Results from the second, China-specific question were: 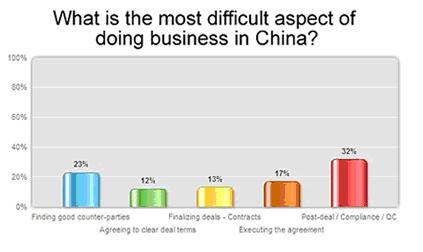 One can draw two conclusions from this data:

2. Westerners in China are choosing inappropriate counter-parties, aren’t doing proper due diligence or are cutting WAY too many corners early in the negotiating process.

Which conclusion is valid? Let’s take a look:

Considered politically incorrect and borderline racist in the west, answer 1 is not without validity. But rather than accuse your dear author of racism for vilifying the entire Chinese Nation with charges of dishonesty, better you re-examine your own puritanical notions about the universality of honesty as a virtue. You may be the one guilty of a subtle yet pervasive form of racism – one that is far more damaging and dangerous to you than to your Chinese counter-party. You may come from a society that holds Judeo-Christian notions of an objective, immutable Truth and considers honesty to be a simple matter of black and white, good and evil – but not everyone in the world necessarily shares your opinion. Chinese history is peopled with strong, moral and SUCCESSFUL leaders who instructed their students about the virtue and efficacy of deception. Sun Tze, in the classic “Art of War” is the most famous Chinese leader to advice followers on the most effective ways to employ deception. Years later, Mao Ze Tong’s “On Guerilla Warfare” described how deception and surprise could neutralize an enemy possessing superior technology and firepower. Even Deng Xiaoping’s “White Cat, Black Cat” lecture effectively argues that managers need to adapt a fluid, pragmatic approach to be successful.

Win-Win negotiation is hardly standard operating procedure in the West and it certainly never really caught on in China. Astute Chinese dealmakers would be ashamed at leaving money on the table or failing to maximize their benefit in a transaction. If the Western counter party is satisfied with the outcome of a deal then the Chinese side has clearly not worked hard enough. Let the Westerners wave signed contracts around all day long – there are always new opportunities and new counter-parties coming down the road.

Or is Choice 2 the true explanation?

Westerners just aren’t doing enough due diligence and are rushing into deals with the wrong counter-parties and a poorly considered deal structure. Actually, I think that this may be the problem much of the time. International lawyers are constantly warning Western clients that suing in Chinese courts is an expensive, time-consuming and ultimately unsatisfying endeavor (www.ChinaLawBlog.com – assorted) – yet novice deal-makers still seem to think that an aggressive legal strategy will remedy any unfavorable deal outcome.

There are several major factors leading Westerners to accept less stringent deal structures (or unreliable counter-parties) in China than they would back home.

A) It’s so hard to get to the negotiating stage with ANY Chinese counter-party that no one wants to let go of the first guy who seems to fit the bill for fear of never finding another one. China is indeed a difficult environment to do your first few deals – and between jet-lag, culture gap and language problems, senior Western managers have been known to suffer from some pretty serious lapses in judgment. Tired, confused and frustrated, otherwise savvy Westerners tend to hear what they want to hear – and believe promises that they would ordinarily suspect.

B) The politically correct types are so afraid of making the Chinese side “lose face” or are so anxious to “build guanxi” that they don’t drive a hard enough bargain — or don’t ask for the right things. Are you in town to buy & sell – or are you here to make friends and build your network? It’s very hard to maximize your profits and ‘build guanxi’ at the same time. Many Westerners have left money on the bargaining table – or worse, signed deals that don’t provide adequate safeguards or quality controls – in the name of ‘building a long term relationship’. Well – once that Western businessman has to explain to his boss or board of directors why he’s just squandered the firm’s money he tends to be less excited about his new relationship in China.

C) Not knowing how to structure a proper China deal. When money changes hands the power balance shifts. That’s when smiles disappear — and phone calls don’t get returned. If your China deal involves up-front payments or transfers of assets and IP, then you are putting yourself in a very dangerous situation. Pay attention to the way you have structured your deal so that your Chinese counter-party doesn’t have to choose between common sense and honesty. Trust is wonderful. Verification is better.

Experienced deal-makers – Chinese and Westerner alike – know to budget time and bandwidth to post-deal negotiation in China. No matter how much time you spend hammering out the deal terms and contracts, you should still expect to conduct your second REAL negotiation after you thought the deal was already done.