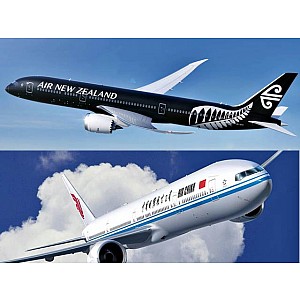 The alliance between the two national carriers will see air capacity between Auckland and Mainland China increase by more than 25 percent year round.

The Beijing-Auckland service will begin operating on 10 December this year and fares will go on sale immediately, with a special limited time introductory fare from just $539NZD one-way (terms and conditions apply).

Both Air New Zealand and Air China are members of Star Alliance, meaning customers will continue to enjoy reciprocal frequent flyer benefits including loyalty earning and redemption and lounge access.

“China is New Zealand’s second largest inbound visitor market and by collaborating with a strong, well respected home market carrier like Air China we can work together to grow this market, and benefit customers through a new direct link between New Zealand and Beijing,” says Mr Luxon.

“We are committed to working with our Star Alliance partner to meet the growing demand from travellers in both markets and provide greater benefits to them,” says Mr Song.

The two flag carriers signed a Statement of Intent to form an alliance in November 2014. The New Zealand Minister of Transport has authorised the alliance until 31 March 2021.