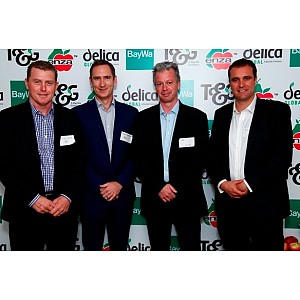 New Zealand-headquartered fresh produce group Turners & Growers (T&G) held an official launch of its China office in Shanghai on 20 May. Set up late last year, as reported on by Asiafruit, the office has already grown to accommodate a team of ten people.

“T&G, through Delica, has been working with Chinese customers for over 15 years, achieving strong growth over this time,” said CEO of T&G Alastair Hulbert. “We did a lot of analysis and decided an in-market resource was vital for enhancing our market position and laying the platform for future growth.”

The team on the ground, led by China country manager Ignacio Smith, has spent the last six months establishing the office structure and connecting with local customers, according to a T&G media release.

“We have a great team here in China and this permanent office enables us to further strengthen relationships with our customers and partners, ultimately to better service the Chinese consumer with high quality fresh fruit and vegetables from New Zealand and other key supply regions,” said Smith.

Smith said the China market is changing rapidly and T&G’s goal is to be at the forefront of those changes and to be able to respond to the evolving market conditions.

“Our growers and suppliers need real time information on market pricing and trends, in order to be able to make the best decisions and adapt their businesses accordingly,” he commented.

The new China office expands T&G’s network of country offices around the world to 15, and to three in Asia, joining Japan and Singapore.

In addition to formally launching the Chinese office, the event celebrated the start of the Southern Hemisphere Jazz and Envy apple programmes in China.

“Following a successful growing season in New Zealand, the popular Jazz and Envy apple programmes are now underway in key markets around the world," said Hulbert. "We continue to invest in building awareness and a compelling brand proposition for consumers to promote these great apples."