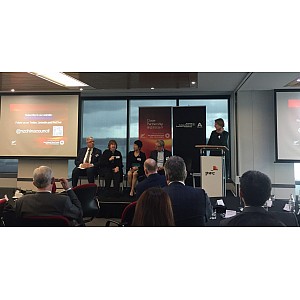 Our investment report “Understanding Chinese Investment in New Zealand” was launched in Auckland on 15 August. 80 representatives from government agencies and businesses attended the event.

The Report was presented by our Executive Director Stephen Jacobi. A panel discussion, moderated by Elizabeth Gollan, Manager International Partnership from ATEED followed, with Tom Nickels, CEO of Waste Management, Maggie Chen, General Manager of Alpha Group and Fran O’Sullivan from NZ Inc on the panel.

The panel discussion focused on understanding the nature and scale of Chinese investment in New Zealand. Tom and Maggie described the main benefits of Chinese investment, especially in R&D, innovation and increased employment. Fran and Stephen talked about public perception of investment from China and the importance of a clear and predictable regulatory environment for investment.

Stephen also acknowledged those companies and organisations who feature in the case studies in the report and thanked them for sharing their stories.

“This is one of the best aspects of the report, bringing to life those financial decisions which have led to real people having new jobs and livelihoods, bringing growth and economic development to both regions and cities around the country, as well as access to new technologies and markets.”