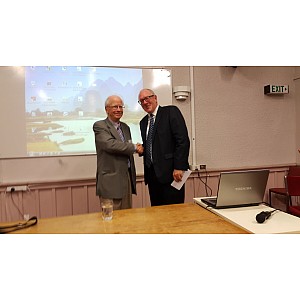 About 100 members and friends of the NZCTA were treated to a fascinating talk on China at the August Wellington meeting by Mr Carl Worker who gave some interesting opinions of the present political position of China today. The meeting was jointly hosted with the New Zealand Institute of International Affairs, and New Zealand China Friendship Society.

Mr Carl Worker spoke about his experiences as a New Zealand diplomat in China, and his opinions on how China will develop in future, in particular, its relationship with the outside world.

Mr Worker was originally posted to Beijing in the 1980’s and remained there until the 1990’s. He was then New Zealand’s Consul General in Hong Kong from 1994 to 1998, before finally becoming New Zealand’s Ambassador to China from 2009 to 2015. His experience of China covers from the start of the reform period initiated by Deng Xiao Ping up until nearly the present day.

The one characteristic that Mr Worker detected in the behaviour of the Chinese leadership was consistency. He is firmly of the opinion that having decided to embark on free market reforms in the 1980’s, the Chinese have consistently followed a policy of “peaceful development”, and that despite some misgivings as a result of the 2008 financial crisis, they are still committed to this. He also believes that the recent anti-corruption drive by President Xi Jinping is partly being driven by the need to remove some individuals who are opposed to further free market reforms.

As for the relationship between China and New Zealand, Mr Worker believes that there is something of a “special relationship” between the two countries. As evidence, he cited the free trade agreements that were signed between the two countries, and New Zealand’s providing of assistance and training to the Chinese in the early stages of their reforms. He also stated that the Chinese felt that New Zealanders were more likely to give China a fairer appraisal of what it is trying to achieve and why than most other countries.

At the end of his talk, Mr Worker fielded a number of questions from the floor. Matters of particular interest were China’s recent actions in the South China Sea, and if New Zealand’s relationship with the United States could be a source of future problems with China.

In response to the first question, Mr Worker felt that China’s actions could partly be explained by the leaderships need to appear strong in matters of national security, especially while trying to remove members of the Chinese national security establishment who were opposed to further market reforms. He also felt that since China has only recently regained major power status after a break of two hundred years, it does not fully appreciate how its actions are perceived by the rest of the world.

We would like to thank all those who attended the meeting and hope you continue to come to our future meetings in Wellington.