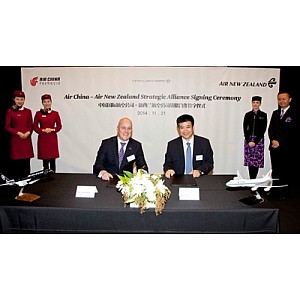 Air New Zealand and Air China signed a Statement of Intent as part of Chinese President Xi Jinping’s state visit to New Zealand that will pave the way for a strategic alliance on services between China and New Zealand.

In addition to a new route, an alliance between the carriers would bring significant benefits to customers travelling in both directions including better network connections in both China and New Zealand and increased frequency of flights.

Air New Zealand Chief Executive Officer Christopher Luxon says a deeper bilateral agreement between the two airlines would help to facilitate both business and tourism links between the two countries.

“However, China remains a challenging market for us to operate to. Working with a strong, well respected home market carrier like Air China would give us a huge opportunity to convert this potential growth, while jointly offering the additional capacity to support it.

“New Zealand businesses and travellers would also benefit from a direct link to China’s capital and tourist attractions of Beijing.”

Air China CEO Song Zhiyong says Air China is committed to being a global hub carrier and alliances and partnerships are an important way to expand its international network.
“In the past three years we have witnessed double digit annual growth in the number of Chinese outbound tourists. New Zealand is one of the most important markets for outbound travel from China and Air China is confident about the promising future of this market, particularly considering the airline’s close ties with Air New Zealand, an innovative airline full of vitality and dynamism.”

Following the signing the airlines will progress discussions with a view to reaching an agreement early this year which can then be filed for regulatory approval.