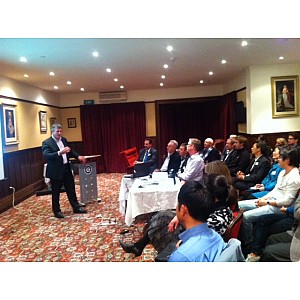 The frequency of events and quality of speakers presenting on their specialists topic have continued to raise the numbers of attendees at the monthly functions being held in Christchurch.

This month’s speaker was Dr John Penno CEO of Synlait Milk Limited. Synlait was the supreme winner of the New Zealand China Trade awards announced in Late May.

John shared with the attendees insights and observations as to trading with China and Synlait’s vision for growth in the future both in building assets and market diversification.

John shared with how and why he entered Synlait Milk in the NZCTA business awards. He was attending one of the Christchurch functions where Michelle MacWilliam was advocating that attendees should enter, as they had nothing to lose but everything to gain. So he thought why not and texted his marketing department, then and there. The rest is history as they became the supreme winners and both the tangible and intangible benefits of winning the award are just beginning to be realised.

This month’s speaker is James Gong of Westland Milk our event is being held on Monday the 26th August at Eliza Manor House.